Mêlée: A mock battle between two opposing teams of knights that formed the tournament of the 12th Century

One on one jousting had not yet become popularized in the 12th century. The mêlée, with two groups of knights basically crashing at each other over an artificial battlefield, was the norm. Think "team sports!" 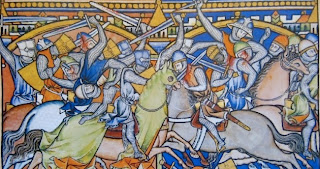 Chaos like in the picture above was the order of the day in the medieval mêlée. Only you weren't supposed to stab anyone's eye out, so that one knight there is being very bad. Although accidents did happen and some knights were killed, that was never the goal. You wanted to capture your opponent and hold him for ransom. Tournaments were intended to be practice for real battle, when stabbing opponents' eyes out would have been perfectly legal.
Posted by Joyce DiPastena at 9:00 AM

I didn't realize until I read your book Dangerous Favor that tournaments were not one on one. And I'd only ever heard of the word melee used as a real battle. So I've learned lots of fun history info from you.
You cracked me up with the "stabbing opponents' eyes out" comment :-)