I've fallen a few weeks behind in sharing a Summary Sunday with you. I'm still working on Courting Cassandry, but I think I'm finally beginning to see the light at the end of the tunnel with this first draft. As usual, my outline flew out the window along the way and the story took on a life and direction of its own. Fingers crossed, though, that it won't be too much longer before I'm able to type "The End!" (Of this first draft. Then of course, there will need to be a second draft, and a third draft, and . . . well, as many drafts as it takes to polish the final product up.)

In the meantime, here is a sampling of sentences from this week's labors (and I assure you, writing often feels very much like labor!) of Courting Cassandry.

Mini-cast of characters to help you keep everybody straight:


Monday: Perhaps that was why Gerolt had courted Cassandry with praise as a girl, instead of speaking to her frankly from his heart, permitting Antony to beguile her away from him with the endearments that fell so easily and passionately from his lips.

Tuesday: Then Cassandry’s words floated into Gerolt’s mind. Rauffe wants so much for you to be proud of him. He has no comprehension of how much you love him. Why have you never told him?

Wednesday: Either way, the bliss she had tasted in Gerolt’s kisses had already shattered. All her longings stilled in his embrace, only to be snatched away by one cruel truth—she was too old.

Thursday: Cassandry would have thrown the gift in Samson’s face if he had been standing here. Instead she threw it on the bed with a force that made it bounce three times across the blankets.

Friday: Cassandry had buried her love for one man in her life. She would bury this love too.

New review of The Lady and the Minstrel! 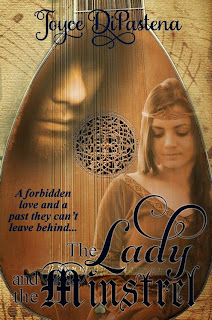 
“The novel effectively incorporates aspects of the time period, ranging from the popularity of fables about Reynard the Fox to the use of dried yarrow leaves. As a result, readers hungry for historical details will find much more than lutes and swords, although the story has its share of both of those, as well…. [T]he tone throughout is one of grandiose emotions and epic decisions—one that’s designed for a man like Robert, who “understood the call of loyalty and love."

“A nuanced, passionate love story that will transport readers to King John’s England.”

You can read the full review on the Kirkus Reviews website:

Kirkus review of The Lady and the Minstrel

Purchase your copy of The Lady and the Minstrel on: