With a Kiss: A Sweet Romance Anthology

Recently I shared with you a preview chapter of my new medieval romance novella, "Just This Moment", which is part of the new With A Kiss sweet romance anthology. I thought you might enjoy a peek at the other novellas included in this anthology, which is available for PRE-ORDER NOW on Amazon. 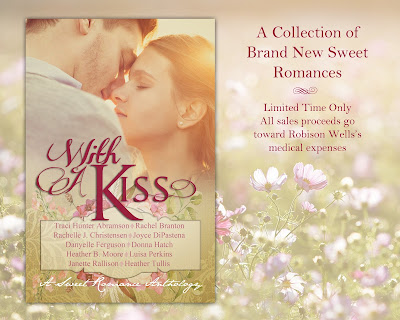 Remember, 100% of the proceeds from this anthology will go towards the medical expenses of author Robison Wells, a longtime supporter of the LDS writing community and founder of the Whitney Awards.

Some of the authors in this collection have generously included a peek at their first chapters, too. I've included a link for each of them below.

Enjoy! And don't forget to pre-order your copy now. The ebook will be delivered to your Kindle device or Kindle app on May 22, 2018.

Romances in this collection:
DANCING TO FREEDOM by Traci Hunter Abramson: A Russian ballerina. An American hockey player. A forbidden romance. Can Katrina follow her heart when freedom is the one thing she lacks? Or will the Cold War cost her the only man she has ever loved?

RYLEE’S MIX-UP by Rachel Branton: Rylee Williams didn’t want to be a bridesmaid at her estranged sister’s wedding, the sister who’d grown up with the family she was supposed to have. So why does she find herself in a dress two sizes too big and no date for the wedding? Maybe it’s time to give up on her family once and for all. But a greased pig contest and handsome cowboy Beck Seeger might just change her mind—both about sticking it out and taking a chance at love. Read the first chapter here

THE REFUGEE’S BILLIONAIRE by Rachelle J. Christensen: Shawn Halstrom has an assignment: travel to Atlanta, Georgia to investigate The Heart of Atlanta refugee center so that Burke Enterprises can make a donation. The job should take two weeks tops, but he wasn’t planning on falling for a Cuban refugee named Carolina Diaz. She’s a single mother who isn’t interested in dating, even if the guy might be a billionaire. Read the first chapter here

JUST THIS MOMENT by Joyce DiPastena: Alys’s late husband thought her useful only for spinning thread. Now a mysterious monk has come to take her to a nunnery. Can a sightless woman like Alys exert her independence to forge a future of her own choice? And will the monk, who stirs forbidden longings in her, help or hinder her? Read the first chapter here

ORIGAMI GIRL by Danyelle Ferguson: Josephine loved teaching crafts at the children's hospital until she was assigned to help Dr. Blake learn how to relate with his patients. As she helps the young doctor soften his sharp edges, relax his rigid folds, and open up to the people around him, she finds she can't help but love the man he's becoming.

SABRINA’S HERO by Donna Hatch: For weeks, Sabrina daydreams about a mysterious gentleman who frequents the lending library. Is he perchance an agent for the crown? A returning war hero? A highwayman? A fateful public assembly introduces her to the mystery man as well as an intriguing newcomer. Now she’s torn between a charming rake promising the adventure she craves, and a handsome barrister offers security. Only one will stand by her when it matters most. Read the first chapter here

FALLING FOR LUCY by Heather B. Moore: Lucy Morley’s older sister is perfect, yet Lucy can’t even hold down a job, let alone stick with something like college. After another disastrous firing, she lands her dream job at a bookstore—and it doesn’t hurt that her new boss, Adam Parks, is pretty much her dream man. But if Lucy is good at one thing, it’s guarding herself from heartbreak. Adam has other plans in mind that include finding a way into Lucy’s heart. Read the first chapter here

MY DEAREST EMMA by Luisa Perkins: Since her husband died at 25, Johanna has worked at a busy hotel in the new railroad town of Danube, Minnesota, soothing her loneliness by writing home to her sister in Germany. When she meets August, a shy widower, her letters reveal a budding friendship. But Johanna soon begins to question whether their romance can survive a demanding employer, August’s jealous daughter, and the misgivings of two recently broken hearts.

COVERTLY YOURS by Janette Rallison: Paisley Spencer never needed a knight in shining armor—until she finds herself surrounded by three gangsters in a bad part of Phoenix. A handsome stranger intervenes, rescuing her from certain disaster. The only catch? Now she has to pretend to be his girlfriend for the next hour. She finds it’s a job she doesn't want to end.

Pre-order your copy of With a Kiss from Amazon.