Have you read about my free keyring giveaway? Here are four readers who have sent me a picture  of them and my sweet medieval romance, Loving Lucianna! That means four of my ten keyrings are gone. Only 6 remain. They're waiting for more readers to send me their pictures!

Click here or on the keychain in the left column to find out more about how you can get a Loving Lucianna keychain! 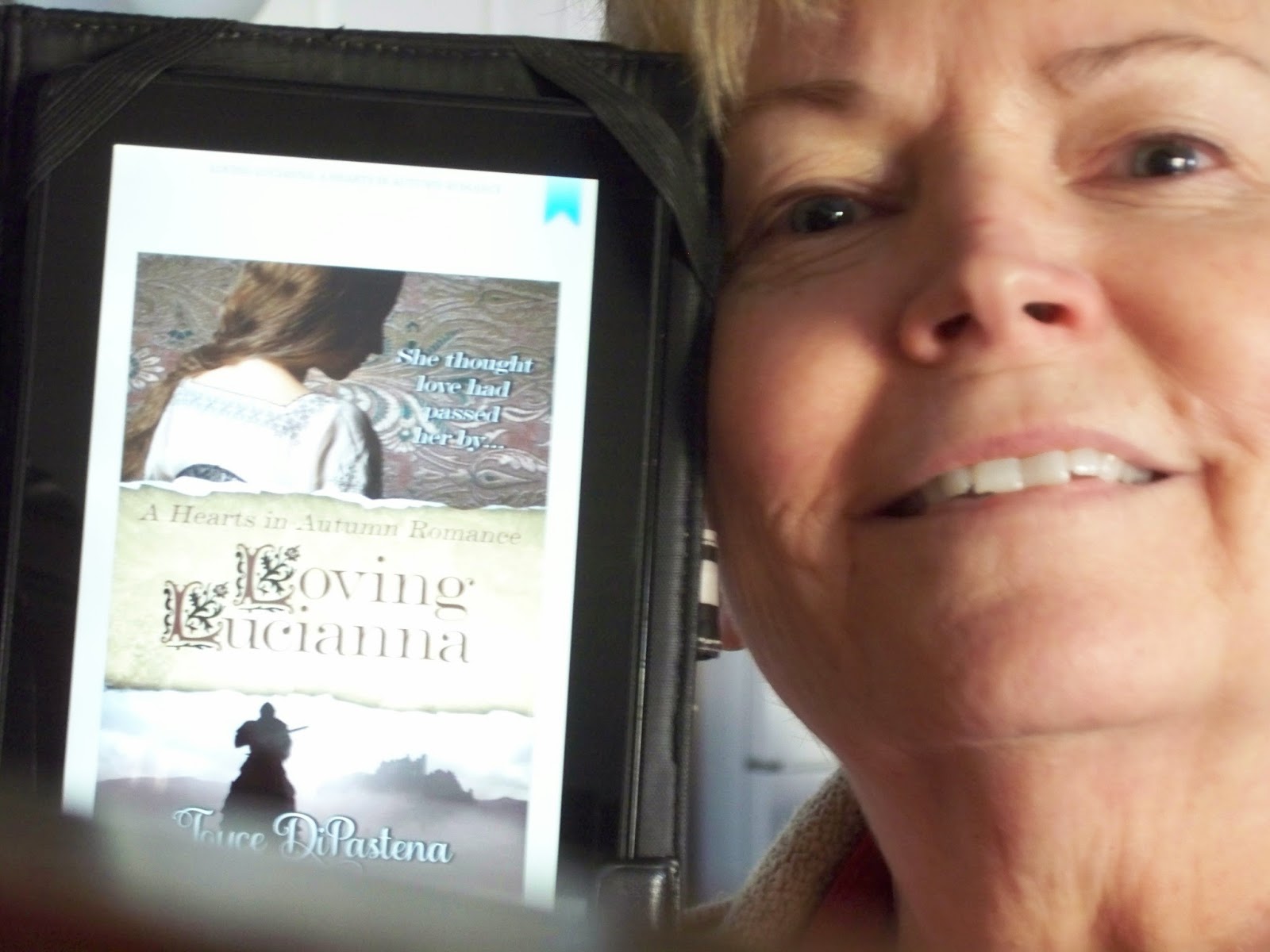 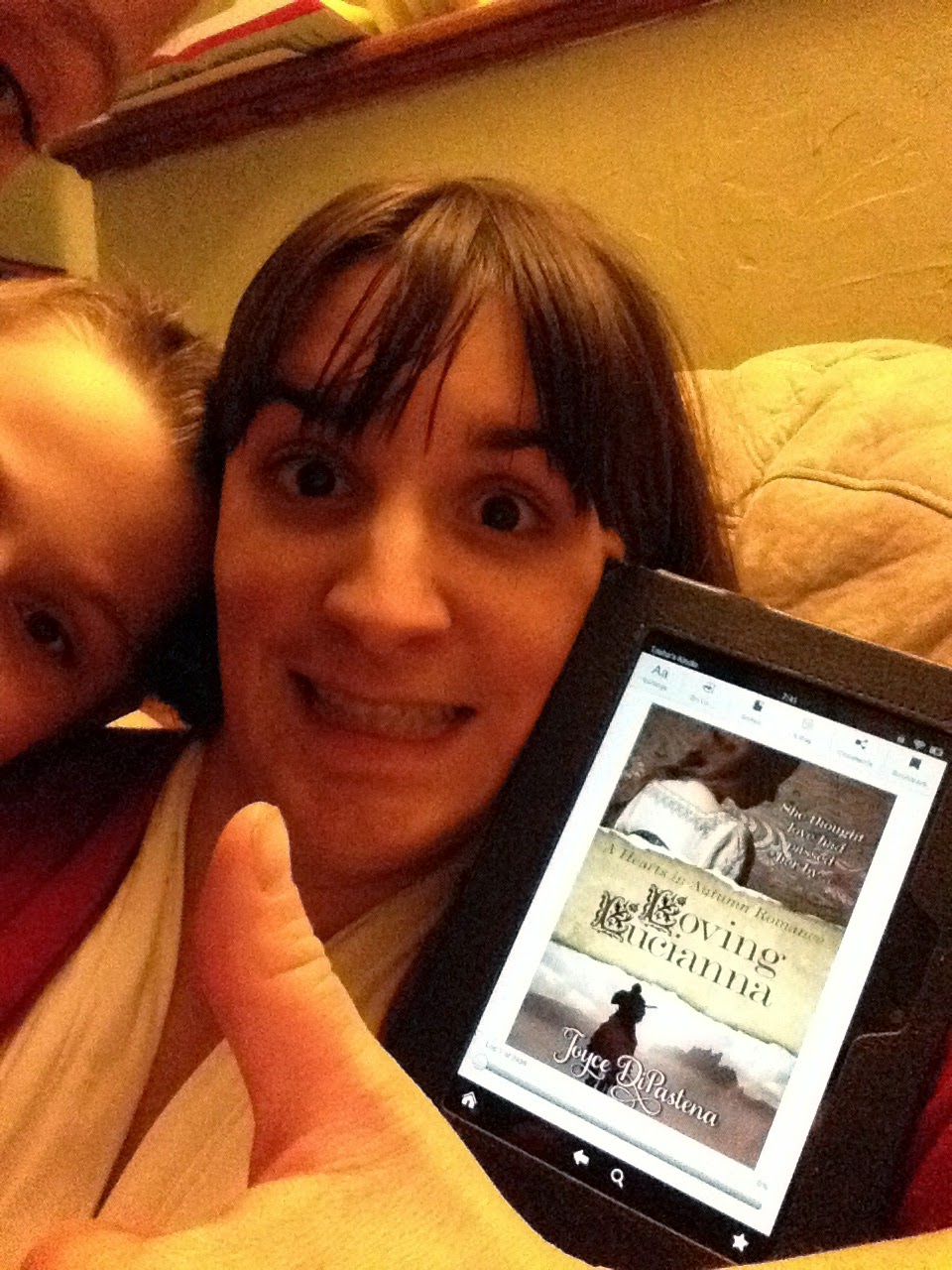 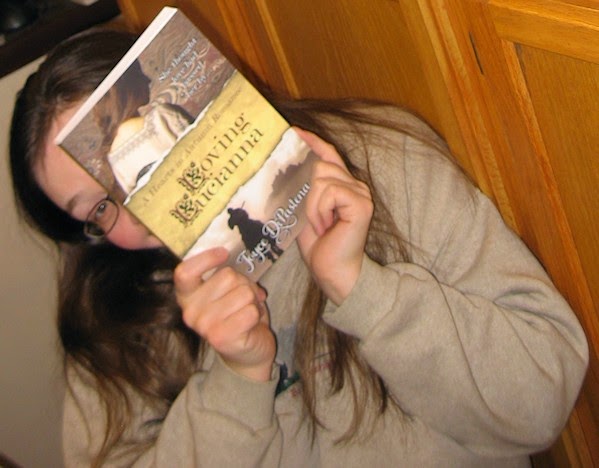 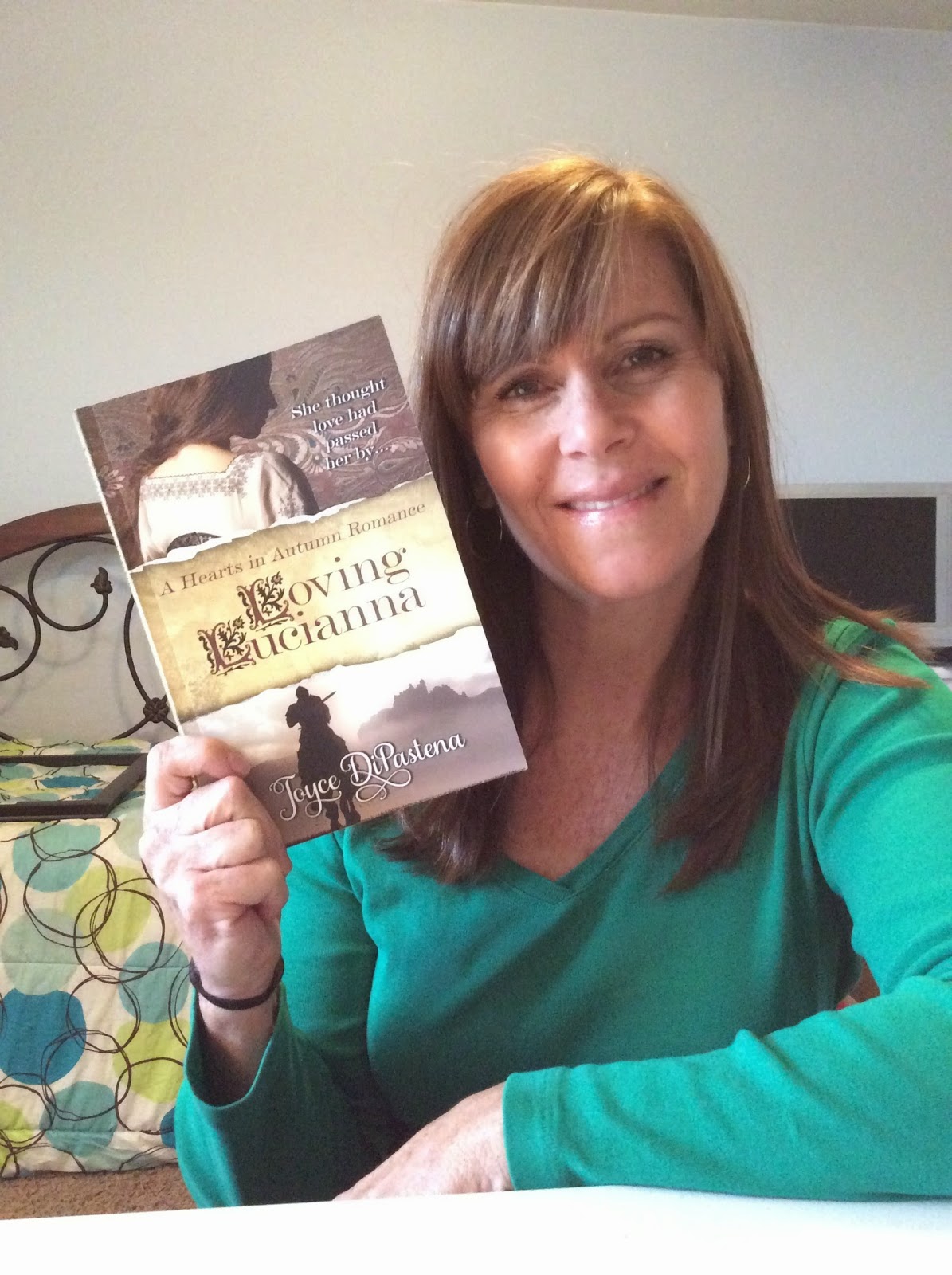 Thank you, ladies, for sharing your beautiful pictures with me!

Discounts! Black Friday/Cyber Monday and beyond!

Looking for some quick and easy stocking stuffers for Christmas? You can never go wrong with a book and you don't even have to leave the comfort of your home for these deals! I'm offering 20% discounts on THREE of my medieval romance titles. The sales start on Black Friday and run through Cyber Monday and beyond! In fact, this sale is available through December 13th.

The discounts are for PRINT copies of Loyalty's Web, Illuminations of the Heart, and Loving Lucianna. Purchases must be made through CreateSpace to use the discount codes. You can use the same discount code for any or all these titles. If you buy multiple books the discount will be applied to your entire order. Just use discount code: PDZJKR7D

Posted by Joyce DiPastena at 12:01 AM No comments:

Wishing you a Happy Musical Thanksgiving!

It's Thanksgiving in the USA, and one thing that I'm grateful for this year (and actually year round) is music! My sister is visiting for the holiday, so I took her to visit the Musical Instrument Museum in Phoenix, AZ. They permitted non-flash photography, so here are some of the photos I snapped with my iPod.

We started out in the Mechanical Music Gallery, where we saw some beautiful old time music boxes, some mechanical figurines, an old player piano, and some pipe organs that included mechanical instruments in their "performance." (I didn't get pictures of the music boxes or piano--I didn't start taking pictures early enough--but here are a few I did get.) 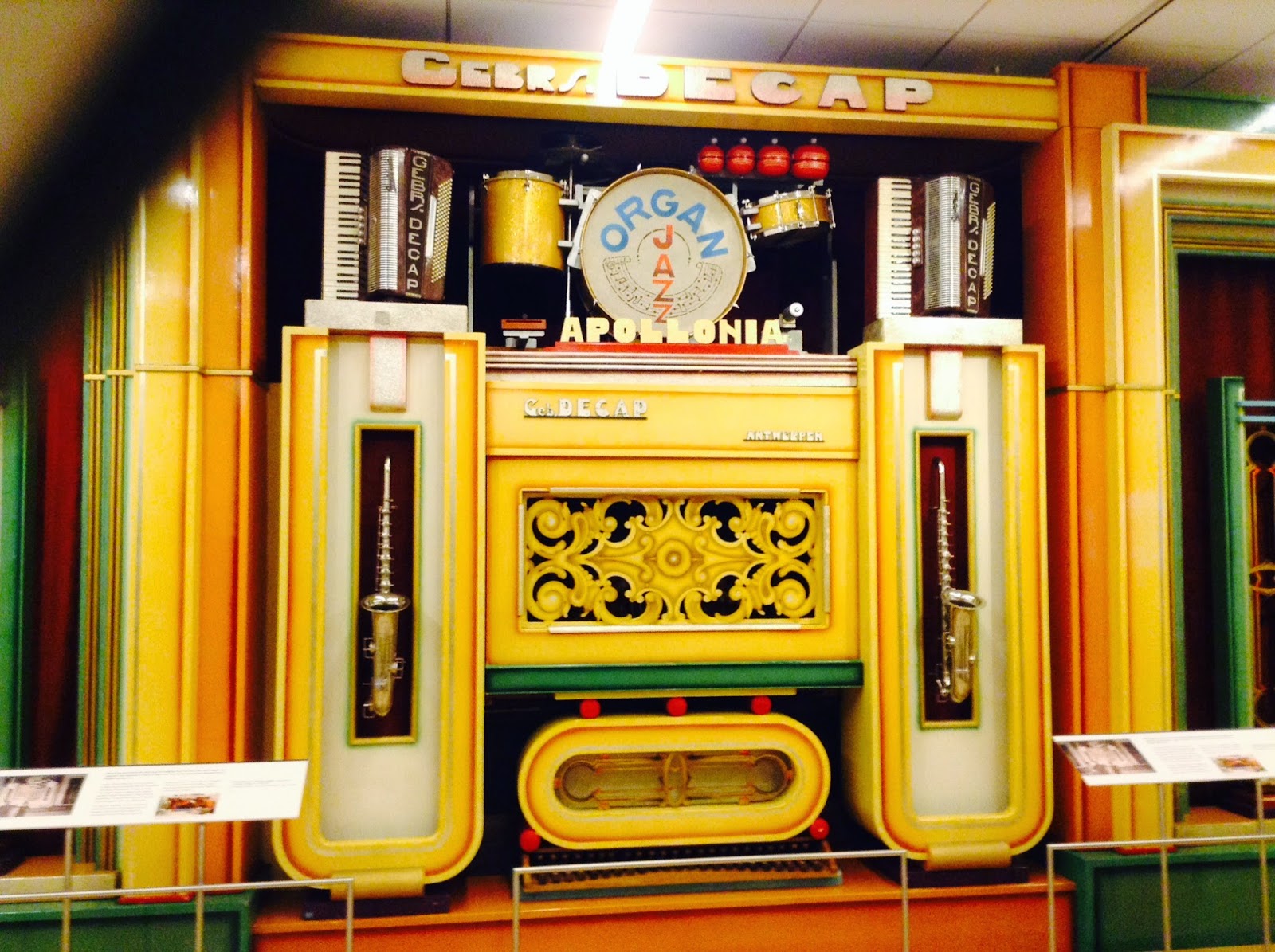 Pipe organ - those instruments you see on top (accordions, drums, saxophones, etc) played music along with the organ! 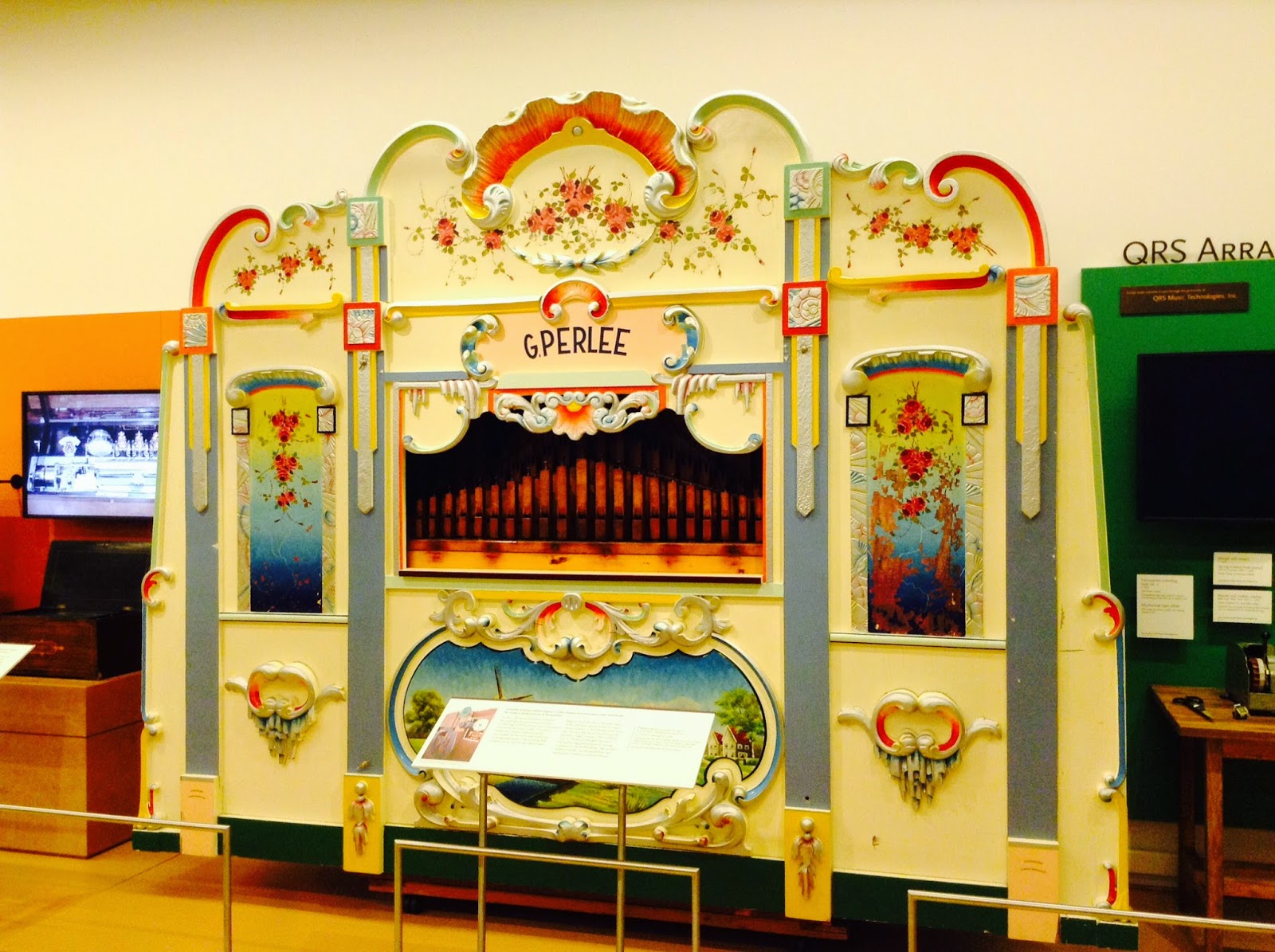 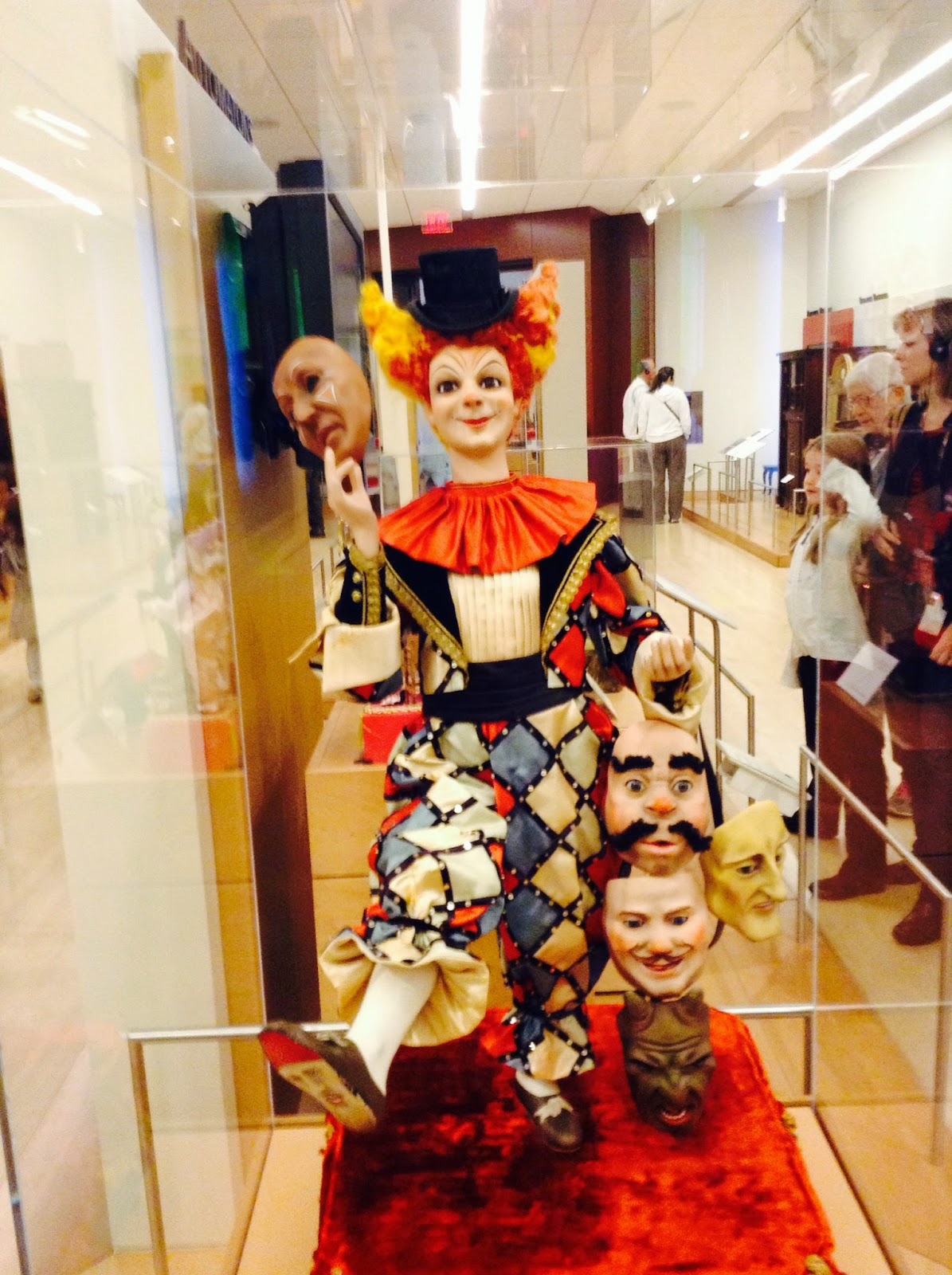 Musical mechanical doll. This one was accompanied by a video that showed it in motion, and it was even freakier than this stationary version!

After lunch in the museum cafe, we visited the gallery of musical instruments for Europe. I wanted to start with Europe because I was hoping to see some medieval instruments that I have used, am using, or might yet use in some of my stories! But I was also lured by a few instruments from other time periods, too. Naturally, in retrospect, I wish I'd taken dozens of additional pictures, but somehow I only came away with these. 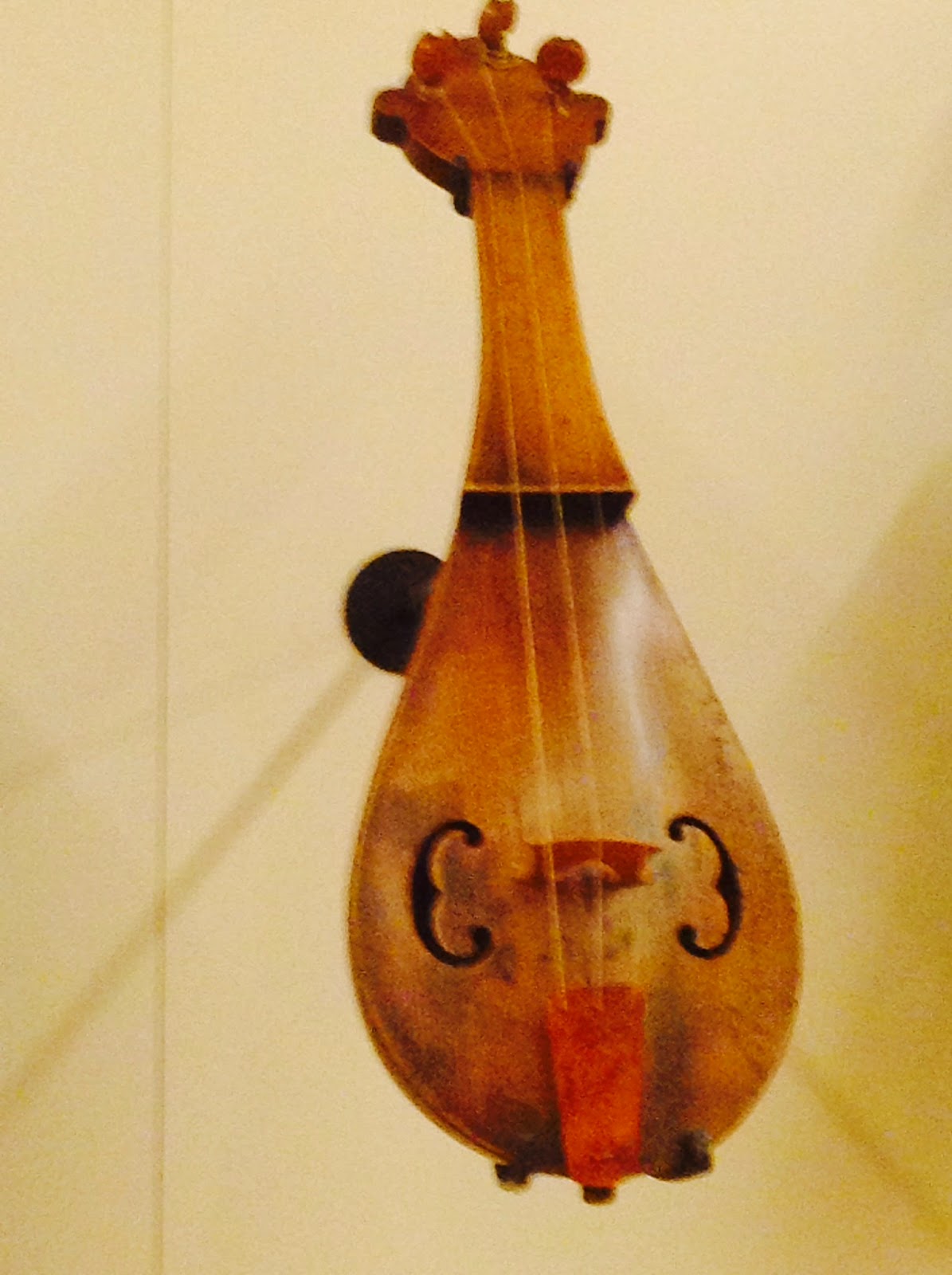 This is called a rebec. It was a stringed instrument used in the Middle Ages and in later time periods, as well. 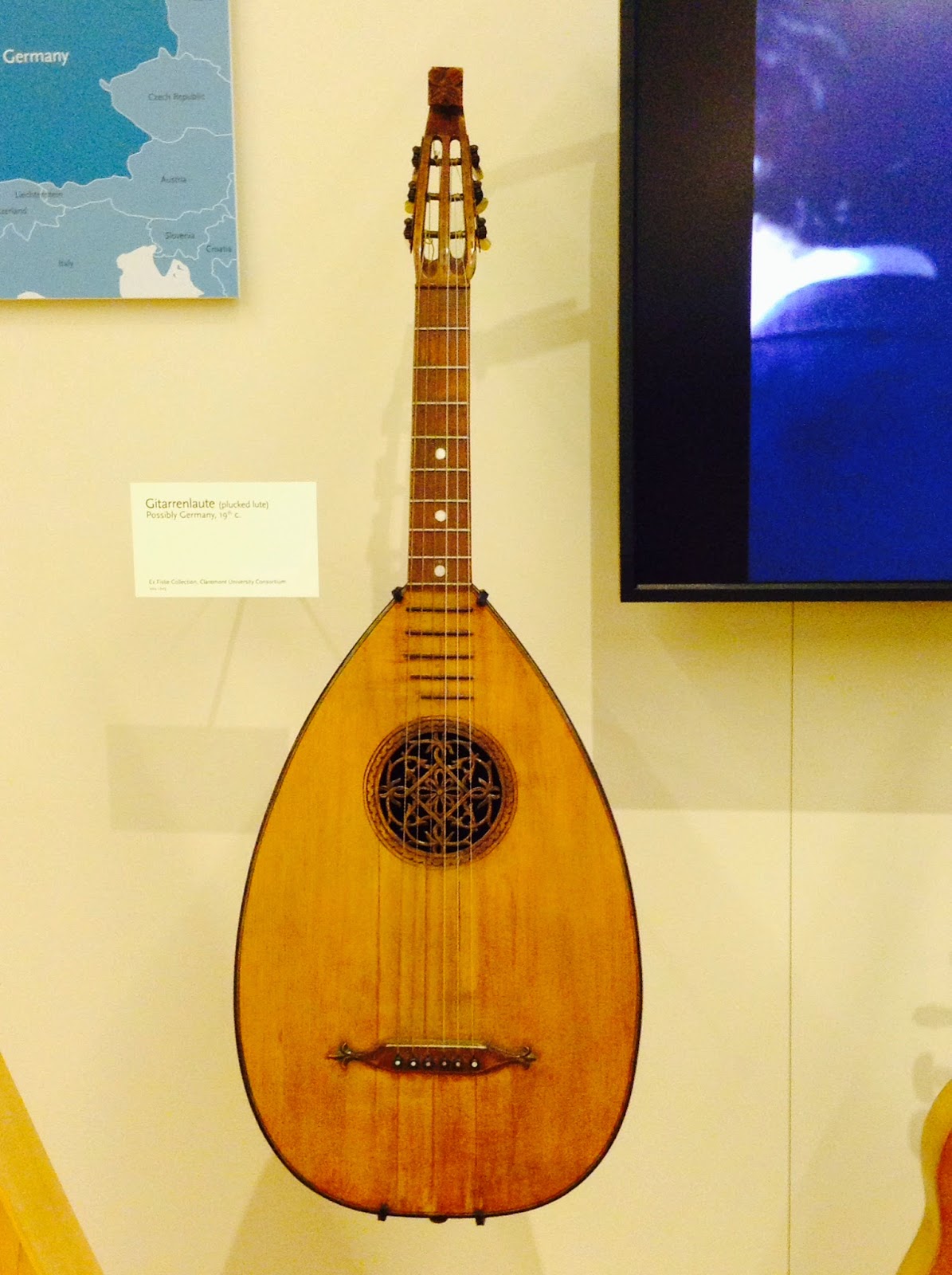 This is a lute. My hero, Robert, plays one of these in The Lady and the Minstrel. 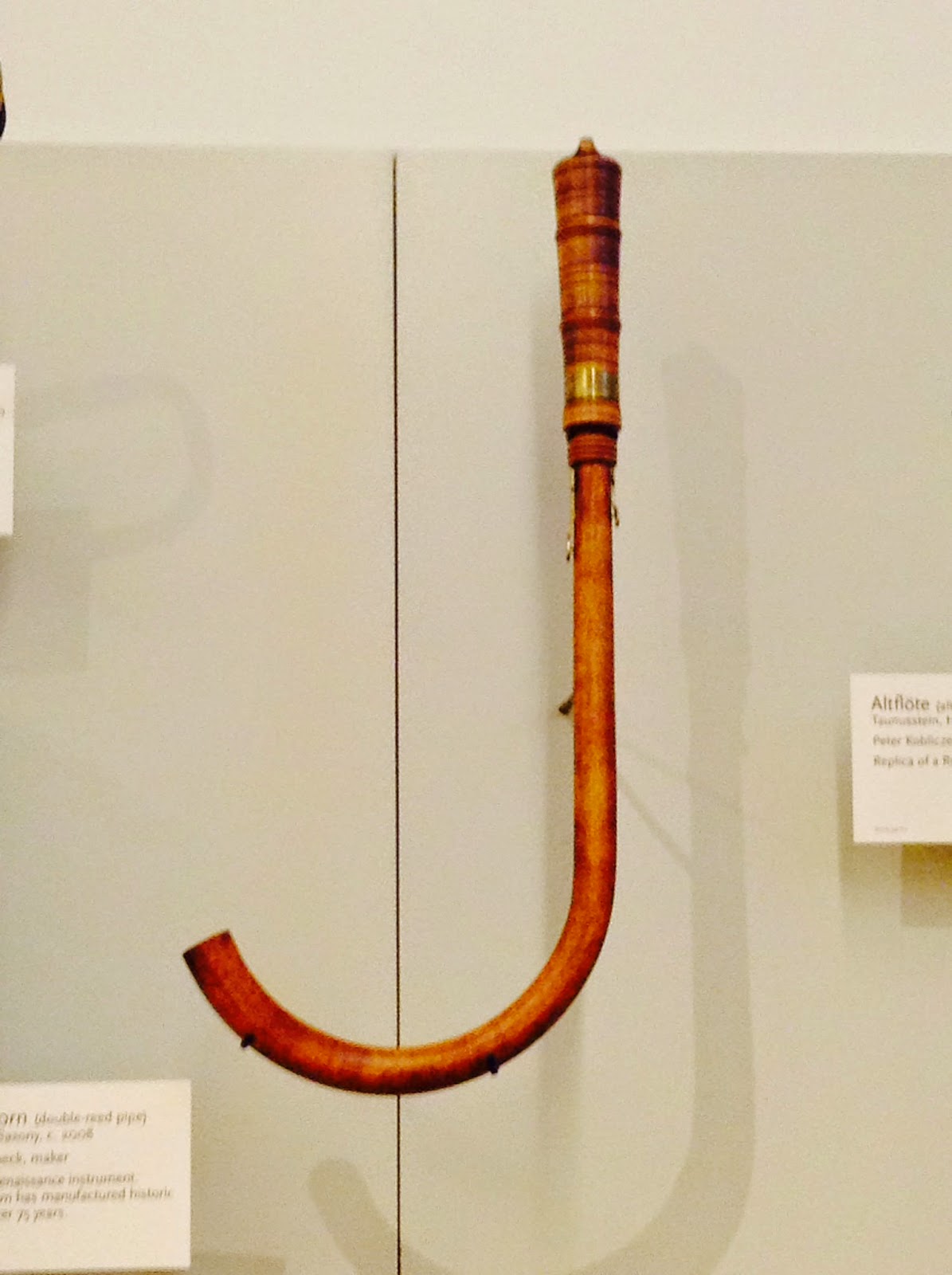 This is called a crumhorn. It was used in the late Middle Ages and Renaissance. Stick around and I'll share a cool crumhorn video with you at the end of this post! 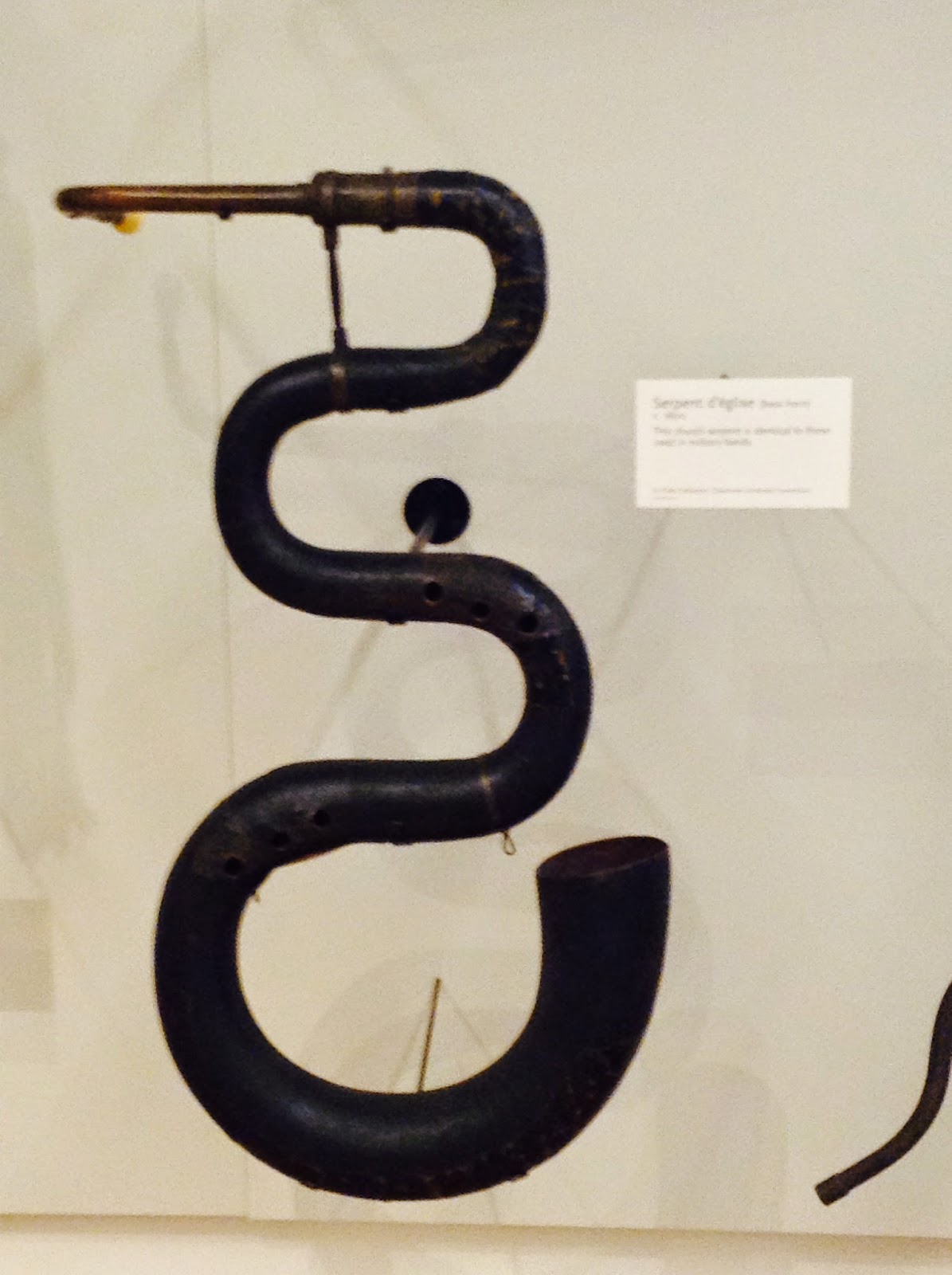 This one's called a serpent. (Can you guess why? :-) ) It originated during the Renaissance. 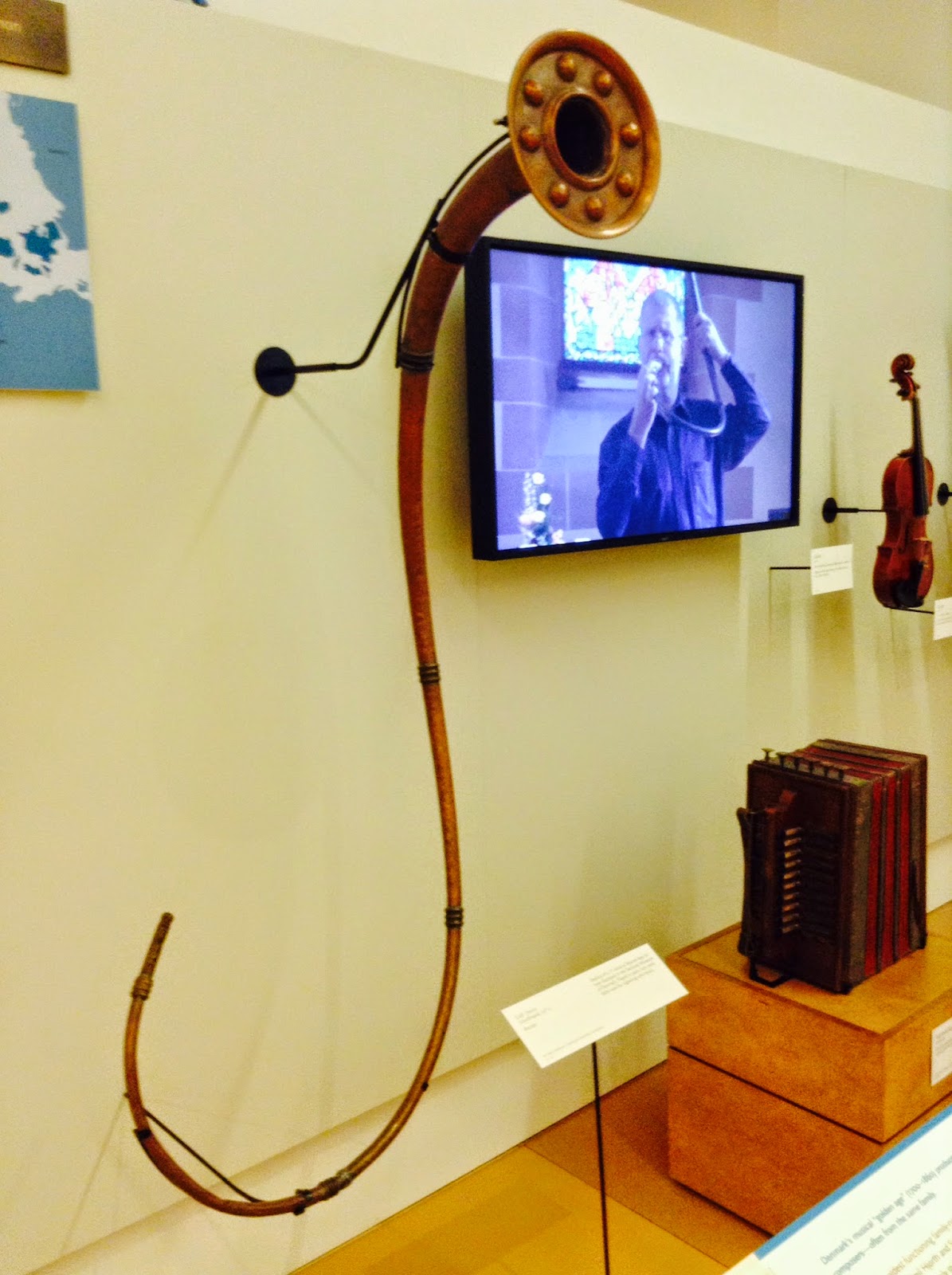 This is called a lur. It was a Scandinavian bronze horn used in the 7th century. That's even earlier than any of my books take place! 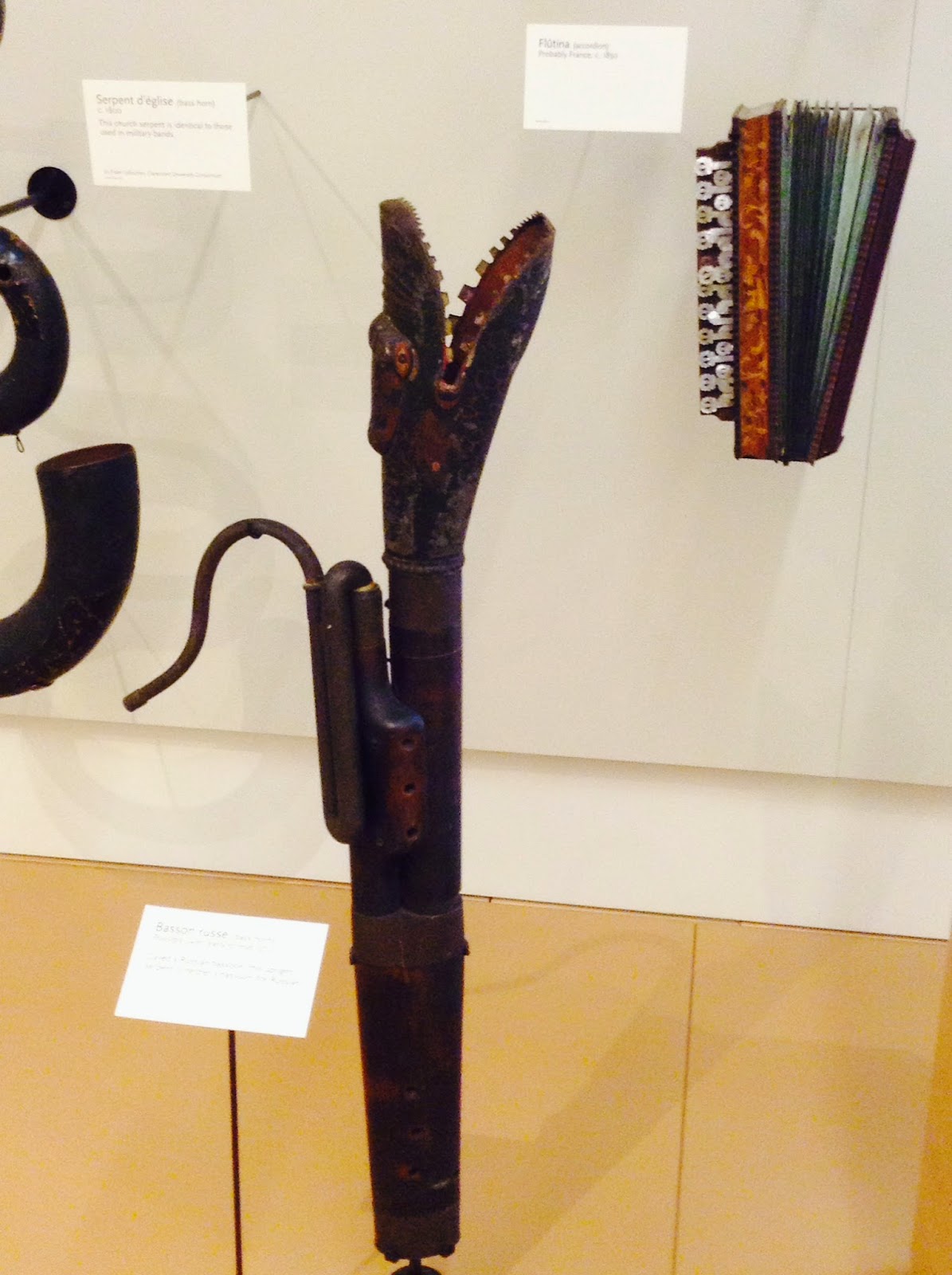 This is a bass horn with a serpent's head. I don't know what time period it's from, but I thought it looked cool! 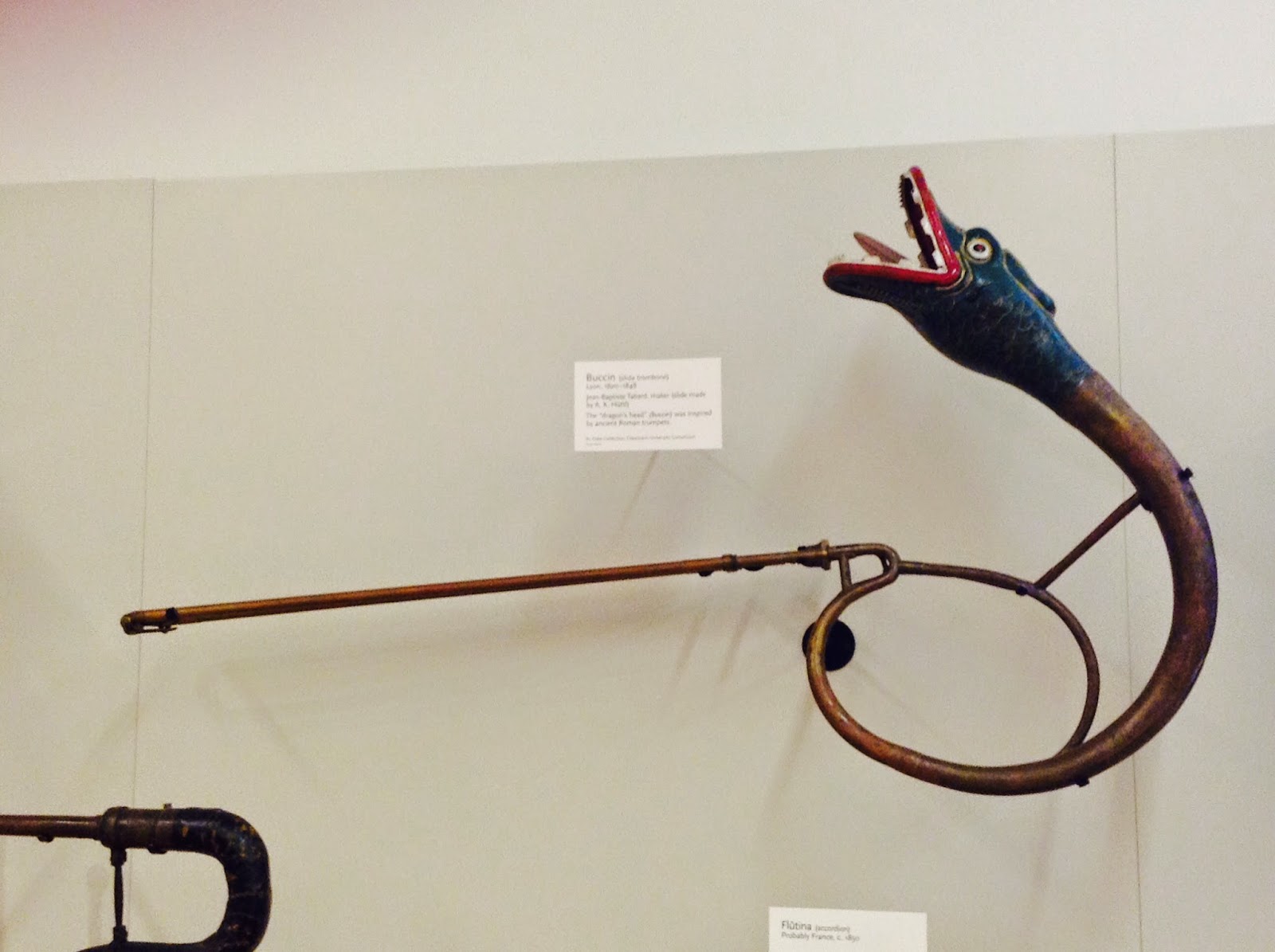 And here's a slide trombone with a serpent's head. It obviously goes with the bass horn above, don't you think? Again, I don't know the time period, but wouldn't it be fun to march in a parade playing one of these? 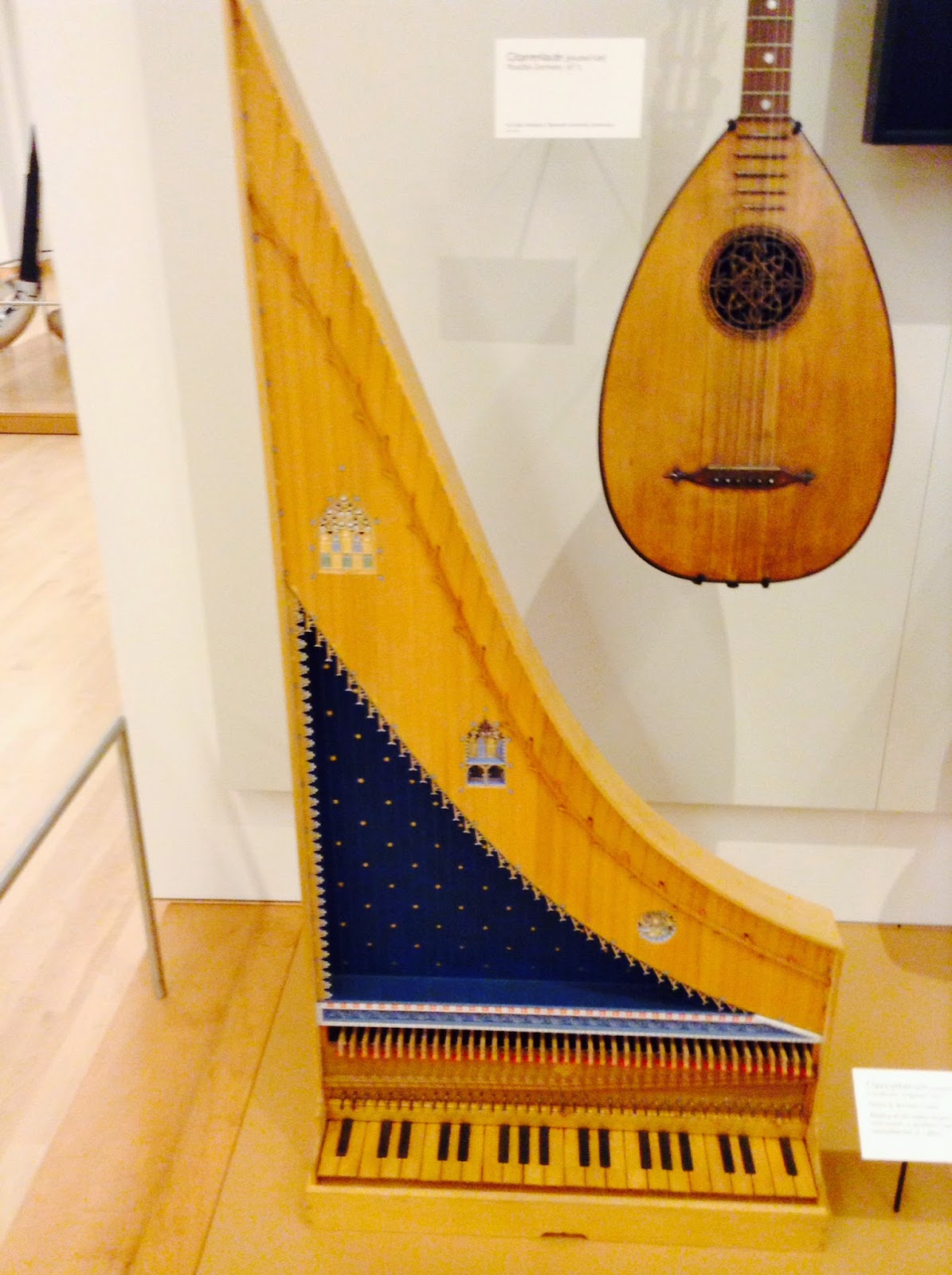 This is a harpsichord, a replica of the oldest extant keyboard instrument, c 1480. (And yes, that's the same lute I showed you above in the background.) 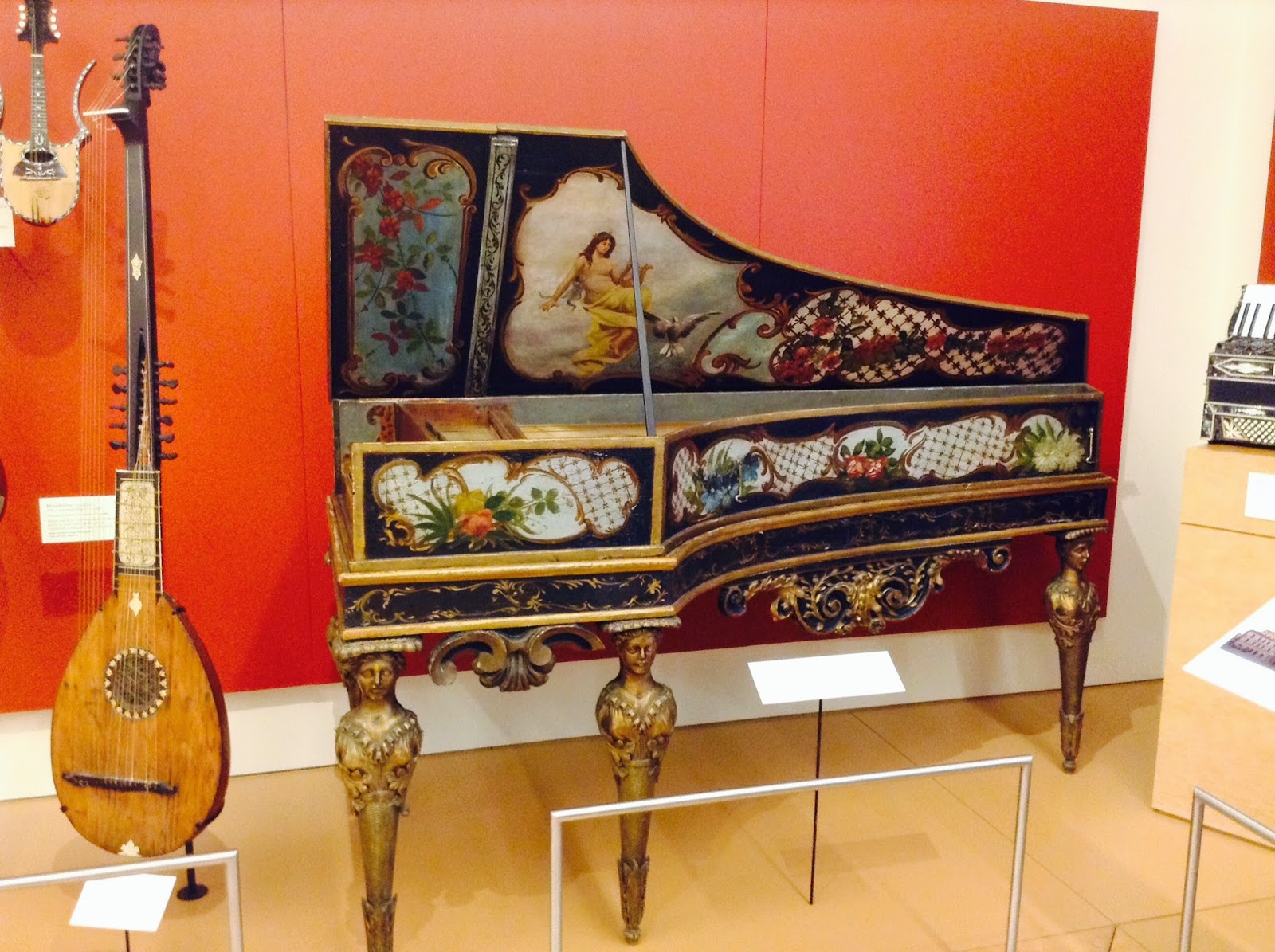 This is the harpsichord as most of us are familiar with it today. This one was made in Florence, Italy in 1890.

Okay, now for the promised crumhorn concert video! I found this on YouTube and fell in love with it. The players are dressed in Renaissance costume. I hope you enjoy it as much as I did!


My sister and I are hoping to go back at Christmas and visit some of the musical galleries from other areas of the world.

Wherever you live, I wish you a very happy day of reflecting on what you are grateful for!

Look what I have, courtesy of Loving the Book Launch Party! Keychains that match the cover of Loving Lucianna! 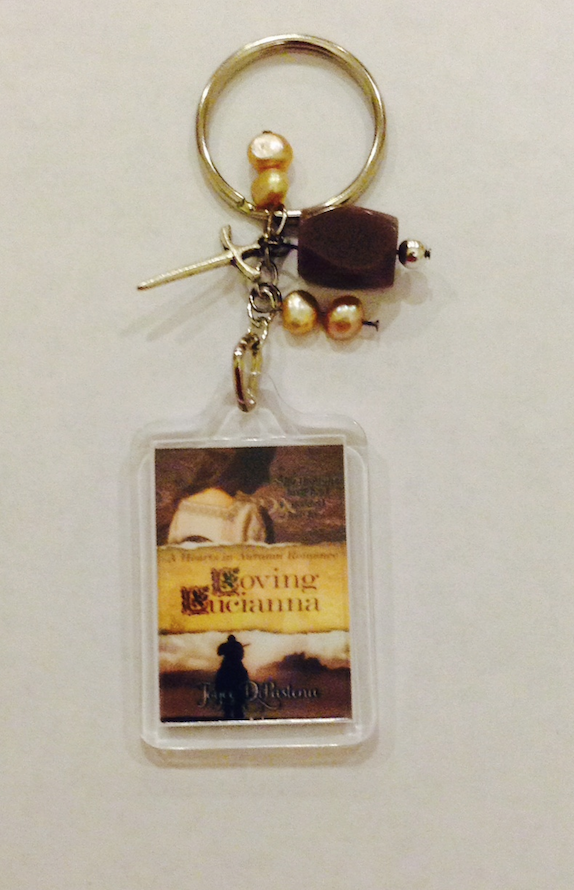 In fact, I have 10 of them and I want to share them with you! If you have read and enjoyed Loving Lucianna, this is all you have to do: snap a photo of you holding a copy of Loving Lucianna (yes, the copy can be on your Kindle or iPad--just be sure the cover is showing) and email me the picture with your permission to post it here on my blog and on Facebook. Email me the photo with your mailing address to jdipastena@yahoo.com and I will send you a free keychain. I'll even throw in some magnets with the covers of Loyalty's Web, Illuminations of the Heart, and Loving Lucianna.

What if you borrowed a copy to read? That's okay, too. Just borrow it back long enough to snap a photo and send it to me.

One keychain per photo. No purchase necessary. (As I said, you're welcome to borrow a copy of Loving Lucianna.) 18 years old or older. USA entries only. Deadline is open until all the keychains are gone. Remember, I only have 10, so start snapping your photos now!

The picture above says it all! Bookmarked Bargains is holding a massive book sale that starts today and runs through November 20! Find free or deeply discounted books in the following categories: contemporary romance, romantic comedy, inspirational romance (LDS/Christian), historical romance, romantic suspense, non-fiction, inspirational fiction (LDS/Christian), YA General/YA Romance, Middle Grade, fantasy/sci fi, and YA fantasy. Two of my medieval romances, Loving Lucianna and A Candlelight Courting: A Short Christmas Romance will each be on sale for only 99 cents!

Also enter to win an awesome Reader's Party Pack, specially designed to include everything a reader needs to enjoy a good book!

Posted by Joyce DiPastena at 6:00 AM No comments:

Loving Lucianna is going on tour!

Loving Lucianna is going on tour today! For the next two weeks, she will be visiting a variety of blogs who have a unique love for "all things Italian." The tour is being hosted by Italy Book Tours, and organized by Laura Fabiani. Since Lucianna and parts of her story take place in medieval Venice, the bloggers of Italy Book Tours have graciously agreed to spotlight and review my book.

And, because Loving Lucianna and I are still in a celebratory mood over her release to readers, I will be giving away 10--yep, 10!--ebook copies during the tour!

So follow along November 10-21 as Loving Lucianna tours Italy!

Join the giveaway on Rafflecopter! (If the form doesn't appear here, click on the Rafflecopter link below.)

Posted by Joyce DiPastena at 8:00 AM 4 comments:

Congratulations to Chanel E, winner of the Spooktacular Blog Hop Giveaway here at JDP NEWS! Chanel has won a three-book combo of my three sweet medieval romances, Loyalty's Web, Illuminations of the Heart, and Loving Lucianna.

Thanks to all of those who entered! I hope you had a wonderful Spook-holiday!

Posted by Joyce DiPastena at 2:43 PM No comments:

Award winning Regency author Donna Hatch has long been one of my favorite Regency romance authors! (Read an interview I did with Donna way back in 2009. See? I've been a fan a long time! Interview) I just discovered that she has a brand new Regency short story coming out for Christmas, and it's available for pre-order NOW! 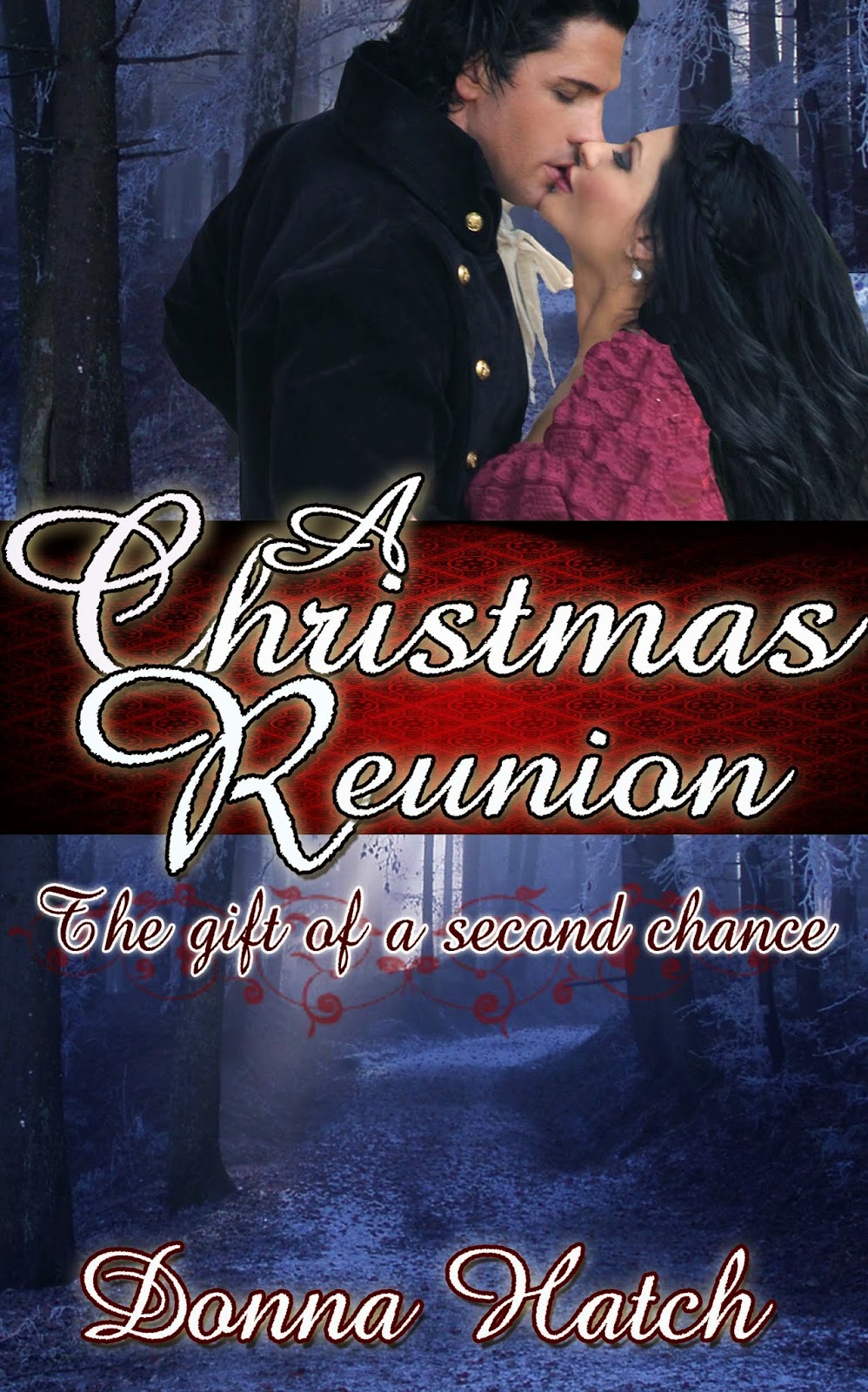 A Christmas Reunion, the Gift of a Second Chance

Heartbroken that her betrothed has wed another woman, Emily is determined to pick up the pieces of her life and enjoy Christmas with her family.

Newly returned from war, Bennett holds a secret and will do anything to ensure Emily, his only true love, never discovers it...even if it means losing her.

Fate reunites the star-crossed lovers and reveals the truth that will either unite them or drive them apart forever.

The Gift of a Second Chance,  published by The Wild Rose Press, will be available in digital format everywhere ebooks are sold starting November 5, 2014

Donna says: It's not part of a series but it might feel like to readers because I seem to be enamored with long lost lovers reuniting, and also with chance meetings at a wayside inn. I'm sure a psychologist would read something into that but hey, I don't question the muse.

I chose the heroine’s name Emily because the root Latin word is Emil, meaning rival. In A Christmas Reunion, there is a rival for the man Emily loves, but it’s not who she thinks. A secondary meaning for Emily is ‘to prevail’ which Emily does and wins back the man she loves, but not in a way she’d ever imagined.

She should step away. She really should. Allowing him to hold her created a long­absent sense of wholeness. As safety enveloped her, her shuddering eased and her tears faded to hiccups. He held her close, so strong and protective. She inhaled his aftershave, something clean and earthy and faintly spicy. The warmth of his body brought familiar comfort. She ached to kiss away all her hurt and loneliness. She ached to restore the love they’d once shared. She ached to be complete again. But he didn’t love her. He’d jilted her for another.

Pre-order (or order) your copy of A Christmas Reunion here.