Illuminations of the Heart is back in print!

Illuminations of the Heart is finally available once more in print, as well as e-book, format. Copies are available now on Amazon, Barnes & Noble,  and will soon be available at other online book stores, like The Book Depository (free shipping world wide). Jaimey Grant of An Author's Art has made me a beautiful cover for the print edition. 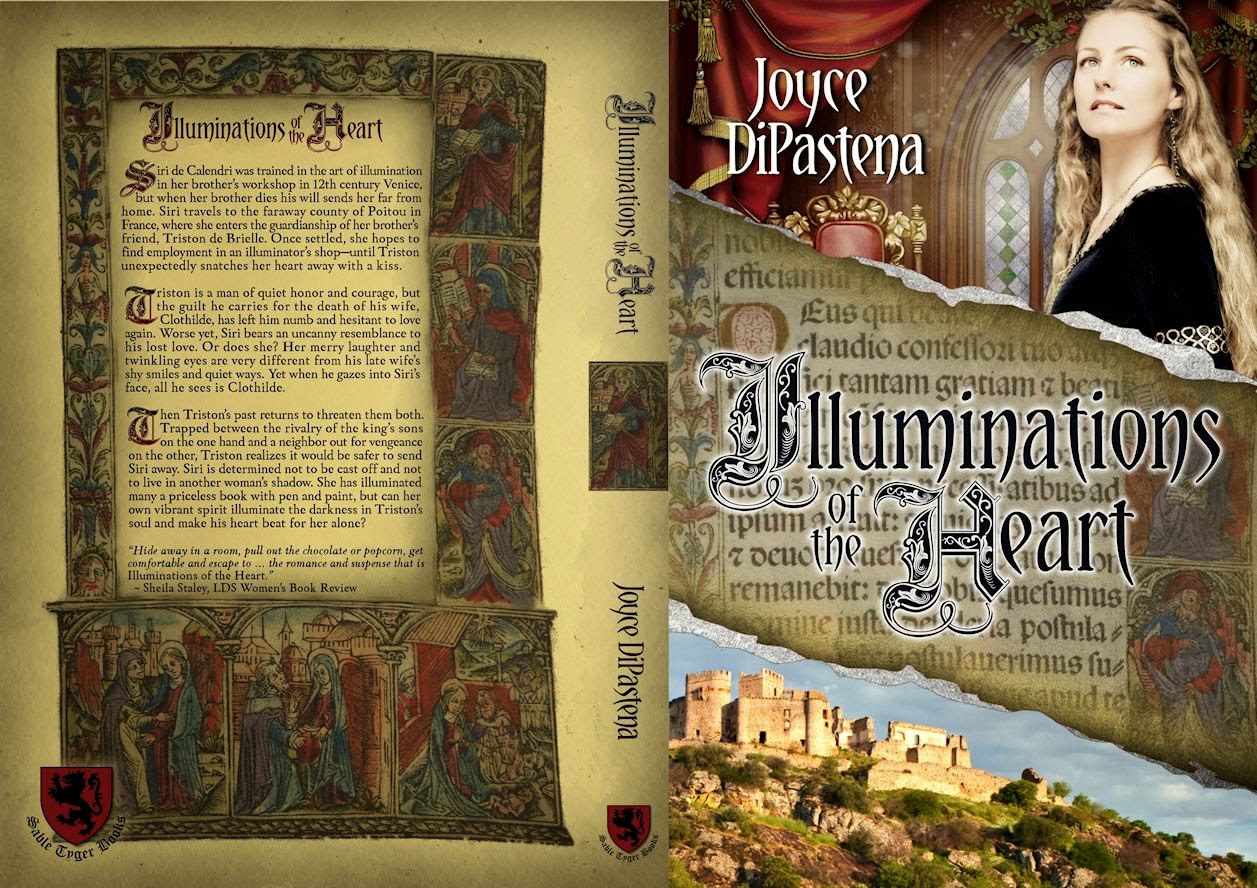 Illuminations of the Heart can now be ordered from your local bookstores, too!

Posted by Joyce DiPastena at 5:52 PM No comments:

Labels: Illuminations of the Heart

And I've reached the end of Lucianna's story! I had a great deal of fun writing the epilogue and hope you will enjoy it, too, when you finally get to read it. But that will be awhile yet. I'm putting this draft to bed, so to speak, and will now let it rest while I begin work on my third round of revisions on The Lady and the Minstrel. When those are done (which may take awhile, since L&M is a novel and Lucianna's story is only a novella), I'll begin a second draft of Lucianna's story. Now that I know "the full story" as well as the ending, I have some fun ideas for how to flesh it out a bit. :-)

So here is a final sampling of new sentences from my first draft of Lucianna's story. Hmmm. I think it's time to start working on a real title for it now!


Monday: Every action, every word, every expression that had made her love him, ruined now by the memory of this day that could never be wiped from her mind and heart because she would always know he had not wiped it from his.

Tuesday: Sir Balduin rarely swore in her presence but the muffled word, though indistinct, bore such a blasphemous hint that it startled her into glancing at him.

Wednesday: He repeated her name, a warm caress of confidence now on his lips.

Thursday: There was a time when Lucianna’s rebukes had intimidated Perrin, but he had grown regrettably impervious to them as his precociousness had coaxed a maternal affection in her and softened the force, if not the frequency, of her chastisements. 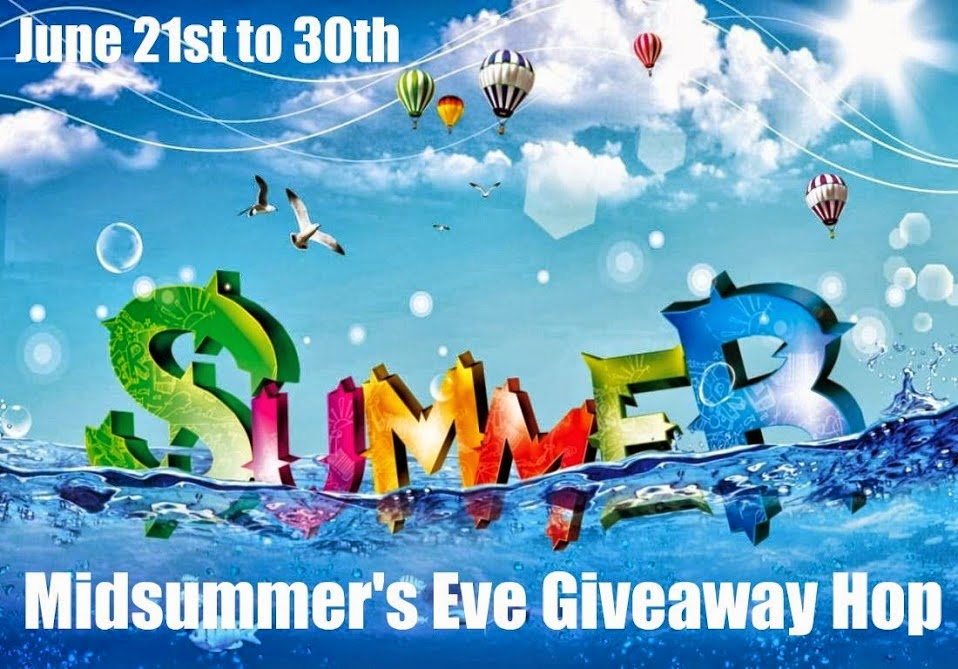 Welcome to the Midsummer's Eve Giveaway Hop, sponsored by I Am a Reader Not a Writer.

Here at JDP NEWS I'm giving away winner's choice of an e-book OR paperback copy of my medieval romance, Loyalty's Web. 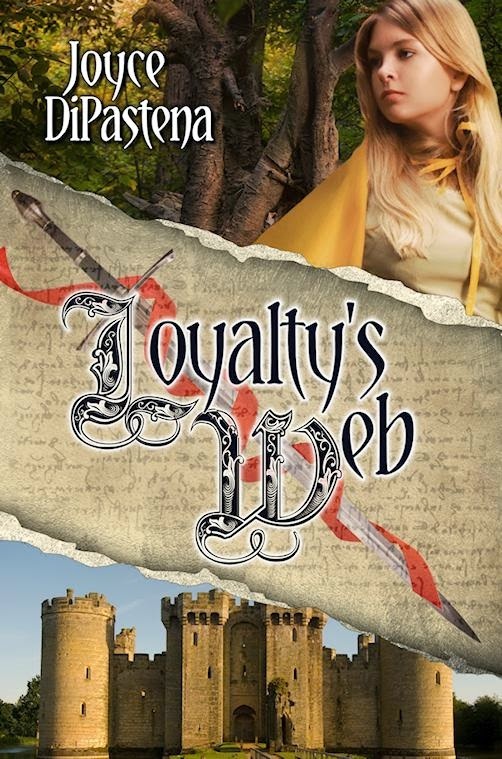 This giveaway is open to international, as well as USA, entries as long as Book Depository mails to your country. If you do not know if they mail to your country, please check the link below:

For reasons I have yet to fathom, my Rafflecopter form disappears whenever I add the blog hop link, so I'm linking you back to I Am a Reader, Not a Writer for the list of more great blog hop giveaways to enter!

Exciting news! I'm almost finished with my first draft of Lucianna's story! I'm hoping to finish it up this next week. Then I'm going to let it sit while I do another round of revisions on The Lady and the Minstrel. As close as I am to the end, I was hoping to be even further along with Lucianna's story before I posted some new sentences, but Friday turned out to be another very-bad-awful-sick-day that was a total blowout for writing. Hopefully there won't be another repeat of my very-bad-awful-sick-day again for a very long time (or even better, never!) and I really am hoping to finish the story this week!

Here is a sampling of what I did accomplish this week, before that very-bad-awful . . . well, you know what I mean. ;-)


Monday: Sir Balduin did not answer. Too many curses hovered on his tongue to be certain one of them might not slip out at any delay that Triston caused him.

Tuesday: Sir Balduin’s blood had begun a familiar pumping, reminding him of the days before his injury when he had ridden into battle at the sides of the masters of Vere.

Wednesday: He broke off, his voice shaking with emotion. For it had all become clear to Sir Balduin in his chamber when Lucianna had told her story, sealed on his heart when she had said, “Non più. No more.

Thursday: Again and again Lucianna had kept her gaze on Siri because she had known herself safe in the young woman’s love. It nearly cleft Sir Balduin’s heart in two that she had not felt herself safe in his.

My sister's gone. I miss her big time, but on the bright side, I got some good writing in again on Lucianna's story. I see the end in sight! Here is a sampling of new sentences from this week.


Monday: There was too much spite in Serafino’s face to hope he might be driven from Vere Castle without exposing her.

Tuesday: “But my hopes are dashed and once and for all, I wash my hands of you.” Serafino struck his palms together twice in Lucianna’s direction, as though literally divesting them of something unclean.

Wednesday: “But you did not marry Vincenzo,” Siri said as Lucianna allowed herself to slip into the increasingly soothing rhythm of gathering and folding Sir Balduin’s scattered clothes. Siri gave a tiny gasp. “Or did you?”

Thursday: Lucianna gave a sharp shake of her head, but her stomach continued to feel like heaving, molten lead.

Friday: No, she could not live like this, grieving for a man she loved, knowing him still so near, feeling his revulsion for her stretching between their castles.