Here's another excerpt from Giacinta's new Chapter 1. I've had a terrible struggle trying to picture medieval Italian architecture for this story. It's all so different from the castles I'm used to describing in England and France. It's taken a very long time for the architectural design that was apparently common to nearly all Venetian houses to begin to click in my brain, but little by little I think I'm getting the idea.

(Speaking of pictures, I actually drew a very rough one imagining what the the portego--1st floor--of Giacinta's house might have looked like.  I thought about sharing it with you, but it's soooo rough I haven't had the courage. Maybe I can neaten it up at some point and share it with you here. We'll see.)

I don't think I've described the portego very well in my story so far, but hopefully it'll get better in revisions. Just do your best to imagine the portego for now in this little excerpt.


Torchlight beckoned her from the T-shaped end of the long hall of the portego. It was left burning all night to allow the illusion that the household of Saverio de Luzio never slept. They did, of course, behind the doors to the chambers that framed both sides of the portego, but her father’s fabrication stood a symbol of her ancestors’ industry that had raised them from simple salt farmers to one of the wealthiest merchant families of Venice. Giacinta passed her father’s chamber and Amadio’s and the others to go gaze through the bank of tall, arching windows that overlooked the canal. Even from the height of this second floor, the torchlight cast small yellow pools against the dark rippling water.
Where would you take me if I let you carry me to the mysteries that lie beyond our city where my father goes, those tantalizing points on the maps that Amadio is such a laggard to learn?
She sighed, turned away, and walked back to Amadio’s chamber, two doors down from her own.

It's nearly inevitable with a writer like me. I tried outlining a book in advance once, but it proved to be a dismal failure. My characters ran off and told an entirely different story and turned all my outlining into a tremendous waste of time. Ever since then, I've just jotted down a few ideas of character and plot to get me started, then started writing and let my characters take me where they wanted to go.

The downside of this writing method is that sometimes my characters don't tell me things in the first draft until I'm several chapters into the story, then they force me to go back and rewrite the beginning before I can push on through the rest of the story. That's what happened with Nick & Gia's story last week. I thought I was happily writing away on Chapter 12 when Giacinta suddenly revealed some new information to me, and now I'm back writing a brand new Chapter 1 just to please her!


“Donato is only a baker, but he says he loves me madly and will knead his fingers to the bone to keep me richly gowned and our table laden with all of the delicacies he imagines must grace the kitchen of a man as rich as Saverio de Luzio, the silk merchant.”
In truth, they dined simply more days than not, especially when her father was on one of his trading ventures. But when he was home and had guests he wished to impress, he loaded his table with foods strewn with exotic spices, and dressed his daughter and son in lavish attire. Giacinta was glad he was gone more months than he was home.


“I do not think Papa cares for love, though. I mean, not for me,” Giacinta added hurriedly, so as not to offend her mother. “You know how Papa is. I do not mind. I do not care for love either, not since Francesco died.” She shifted her gaze away from the bright star called Venere, scanning the shimmer of lights in the blue-black canopy of the heavens. Curious she had never found a star to remind her of Francesco. She supposed she still carried his memory too deeply in her heart to let him free.

Welcome to the May FREE For All & Giveaway Event 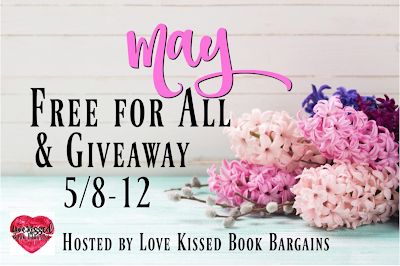 Thank you for being loyal readers! To show their appreciation, your favorite authors have come together to offer a book for FREE. Download one or all. Maybe you'll find your next favorite author.

Please note: all sales are limited time offers.
Don't have a Kindle? Don't worry. Read with the FREE Kindle App.

**Please note: these books may not be free on other Amazon sites and many of these books are free for a limited time only.**

I fell off the Tuesday Teaser wagon for a bit...I do that sometimes. Sorry! Let's give it another go-round. Here's a new teaser from Nick & Gia's story. (Yes, I'm still working on it. Slow and steady will hopefully win this race...eventually!)

Did I mention that the hero of Courting Cassandry, Gerolt de Warrenne, plays a part in this story when he was a young man? Here are a few paragraphs of him getting into mischief with his friend, Samson, in medieval Venice.


Caution dissipated as Gerolt found the first handholds and pulled himself up. He expected the path to be easier, given Samson’s dexterity, but the bricks were not always where Gerolt thought they should be. Perhaps because his limbs were so much longer than Samson’s, he kept misjudging their placement. Di Luzio had not been much above Samson’s height, so the distance between the bricks had undoubtedly been chosen for the natural length of his body.

Gerolt tried to think “shorter”, but soon he felt a wild giddiness rushing through his brain. It’s the wine, he thought, hitting me at last. He glanced down, startled for a moment to see how far below him lay the shadows of the garden. He had stood on the soaring parapets of his father’s castle and looked out over land and people grown curiously small, but he had never hung in the air like this, so exposed, so helpless should his grip slip. Would he plummet into a bramble bush or would he hit the hard earth at the bottom of those shadows? Would the fall bruise, or had he climbed high enough to break a few bones? Or my back? Or my neck?

He bit off a euphoric laugh. It is the wine. It has made a fool out of you. Yet as he scrambled for the next brick and the next, he thought he had never felt so blazingly alive as he did scaling this gloriously precarious wall.