Here are a few photos from my book signing at the Arizona Renaissance Festival on March 14, 2009. 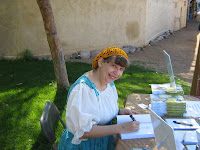 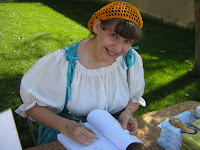 A close up shot of me and my snood. 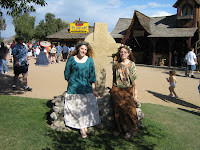 My apprentices, Mistress Ginny of Romney Marsh and Mistress Kaitlyn of Greenwich, their lovely gowns dappled in the shadows of the late afternoon sun. 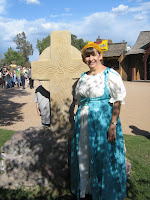 Those dappled shadows got me, too. 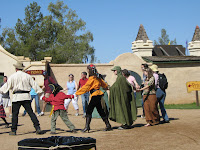 Mistress Kaitlyn merrily dancing the Escargot. Can you find her?

You can see more pictures of the Arizona Renaissance Festival from 2008 on my website under the "My Albums" tab.
Posted by Joyce DiPastena at 5:09 PM 6 comments:

We Haven't Forgotten, Have We?

No, it's not the anniversary of this event, but as I was reading through the book of Isaiah today, I found tucked into chapter 40 a copy of the speech that President George W. Bush addressed to the nation when the space shuttle, Columbia, disintegrated upon re-entry into the atmosphere on February 1, 2003. President Bush quoted from Isaiah 40:26 the following:

"Lift your eyes and look to the heavens. Who created all these? He who brings out the starry hosts one by one and calls them each by name. Because of his great power and mighty stength not one of them is missing."

"The same creator who names the stars also knows the names of the seven souls we mourn today. The crew of the shuttle Columbia did not return safely to Earth; yet we can pray that all are safely home."
Posted by Joyce DiPastena at 11:09 AM No comments:

Book Review of The Dark Lantern, by Gerri Brightwell

Devon-born housemaid Jane Wilbred has snared her new post with the Bentley family with a letter of reference she forged, omitting any mention of the possibly pertinent fact tha

t her late mother was a notorious murderer. That, however, is trifling compared to the shady games being played both upstairs and downstairs at 32 Cursitor Road while the family matriarch lingers on her deathbed, especially the struggle between mysterious beauty Mina Bentley, wife of younger son Robert, and the wan stranger who claims to be the widow of older brother Henry (drowned recently while sailing home after years in India). Meanwhile, Robert is focused on a battle closer to his heart: winning official recognition for anthropometry, the science of identifying criminals by body measurements. Far from being an arcane digression, Robert's passion eventually figures into the intricate and surprising plot. The action will keep the reader as intrigued as a parlor maid eavesdroppig outside her mistress's boudoir. (From Publishers Weekly)


I found myself ambivalent about this novel all the while I was reading it. Knowing that I would be reviewing it as part of my Goodreads Historical Fiction Reading Challenge 2009, I was continually weighing what I would ultimately say in this review. So here goes:

Things I liked about the book:

The whole concept of anthropometry—the late nineteenth century criminology technique of identifying criminals by measuring such body parts as their ears, noses, hands, feet, and of course, the size of their heads—was fascinating. The Dark Lantern follows anthropometry and its opposing crime solving technique, fingerprinting, through the character of Robert Bentley, who champions what he perceives as the “superiority” of anthropometry throughout the book. We know today, of course, which technique of identifying criminals ultimately won out, but which technique solves one of the many mysteries at the end of The Dark Lantern, I will leave to the reader to discover.

The characters we well drawn, though I did not always agree with the author’s apparent perception of her own characters. For instance, the maid, Jane, was frequently praised as being “clever”, but she spent a good deal of the book weeping and did precious little that I could discern to earn the “clever” label by any of her actions. (And in some cases, I judged her quite the opposite.) Nevertheless, however I may have personally interpreted the various characters, I cannot deny that they all held my attention from beginning to end.

I liked the way the author revealed her mysteries a little at a time, rather than spilling everything out at once.

Things I disliked about the book:

I could have dispensed with each and every reference to any of the characters’ bladders, and really didn’t feel the need to “watch” any of them “relieve” themselves, as happened more than once. Is this considered some kind of “literary realism”? If so, it just confirms to me once more than I am not a “literary reader”.

Yes, yes, I know that sex scenes are nearly de rigueur in fiction these days, but although such scenes in The Dark Lantern were relatively few and short, I would still have been happier if they hadn’t been included at all. I’m sure the author felt they were essential, but since I was able to skip right over them and still understand all the essentials of the plot, I don’t think the story would have suffered in the least by leaving the scenes out to begin with.

There was a disturbing near-rape scene towards the end of the book. There was also, towards the end, the description of a corpse that was far too graphic for my taste. I understand why the author wrote it that way, but if you’re a squeamish reader, be warned: it’s not an image easily erased from your mind.

Things I was ambivalent about:

The narration (except for flashbacks) was told entirely in the present tense. The first few times I picked the book up to read it, I found this tense jarring, but I have to admit, after a bit the story fell into a kind of a flow that made me forget what initially felt like an affectation on the author’s part.

The book had what I would call a “leisurely” pace. I can’t quite call it “slow”, because it held my attention and made me want to keep reading, but if it were a piece of music, I’d label it “andante”, or even perhaps, “adagio”. Once I realized that I was not, in fact, reading a typical “mystery” book, as a review I’d read had led me to expect, but in fact, more of a literary novel woven around a number of mysteries, the pacing seemed appropriate to the story the author had chosen to tell.

Although this was not strictly a “mystery” book, nevertheless, once a mystery has been raised, I expect an author to reveal all the answers by the end of the book. In a great many respects, the author did tie up loose ends, but there were one or two ends that remained loose at the conclusion, and I found that disappointing.

Is this a book I would want to read again? Sadly, no. The negatives for me outweighed the positives by far. And the biggest negative of all was, once again, more a reflection of my own reading taste than it was of the author’s talent. Plain and simple: I like a happy ending with my books. While some of the characters achieved that, others did not. Regrettably for me, the characters who did have “happy endings” were the characters I least personally cared about, while those that I had found myself rooting for were the ones who were left miserable in the end. However, since each reader will likely find herself/himself attracted to different characters, you may find yourself quite satisfied where I was disappointed.

Would I recommend The Dark Lantern?

As for the rest, read my pros and cons above, weigh your own reading tastes, and decide for yourself if The Dark Lantern is a book for you!

Now my Goodreads Historical Fiction Reading Challenge 2009 is over! I’ve read three historical novels in three months, so I will likely not be reviewing any more books in this kind of depth on this blog, unless/until I accept another reading challenge in the future. For now, I’m off to read something “light and familiar”, to balance out The Dark Lantern. Some old favorite I haven’t read for years. I wonder what book I will choose? When I decide, I’ll list it under “Books I’m Reading Now” in the left column of this page…just in case you’re curious.
Posted by Joyce DiPastena at 12:41 PM 1 comment:

For those of you who live in, or may be visiting, Arizona, I will be doing a book signing of my medieval romance novel, Loyalty’s Web, at the Arizona Renaissance Festival on March 14, from 10 AM - Noon. C’mon out and “Meet the Author”. 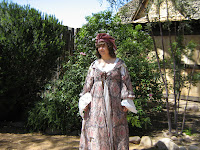 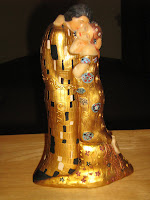 And while you’re there, you can sign up for a free drawing to win a lovely statuette based on Gustav Klimt’s painting, “The Kiss”. (Personally, I like the statuette even better than the painting!) No purchase is necessary to enter the drawing, aside from purchasing a ticket to enter the Renaissance Festival on March 14. I’d love to see you there!

For more information on the Festival, click on Arizona Renaissance Festival. Join us there on March 14 for “The Greatest Party Since Camelot”. Huzzah!
Posted by Joyce DiPastena at 8:55 PM No comments: