I began the Medieval Word of the Day blog post series with Illuminations of the Heart, sharing with you some of the medieval words I used in that story. With the release of my new medieval romance, Dangerous Favor, I have some new medieval words to share with you. Since  a medieval tournament plays a large role in my story, let's begin with some of the armor a knight must don for a tournament:

Coif: A hood made from metal rings (i.e., mail), worn beneath a knight’s helmet

Ventail: A piece of mail that protected a knight’s throat and chin 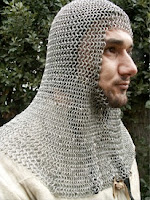 Here's an example of a mail coif
(from CAS Hanwei)

Here's one example of a ventail in the form of a diagonal flap that tied onto the coif to protect the lower part of the knight's face. This flap could be square as well as diagonal.
(from Swords of Might)

That looks pretty uncomfortable, especially if all this hardware is worn underneath a metal helmet! Some drawings of ventails show them only covering the throat and chin, like this:

My hero, Etienne, preferred this style of ventail.
(Image from The Montague Millennium)

View some other parts of a medieval knight's armor from this September 16, 2009 Medieval Word of the Day entry.
Posted by Joyce DiPastena at 9:00 AM