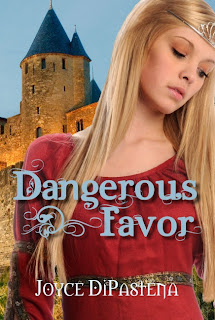 Here's the official back cover blurb:
Mathilde is in need of a champion!
Her father has been accused of stealing from the king, an allegation that has reduced her family to poverty. She has one chance to find and marry a man who can help her prove her father's innocence. Lord Therri, heir to a rich barony, has the wealth and connections Mathilde needs to delve into the mysteries of her father's past. Furthermore, Therri embodies all her romantic dreams.
Etienne, the younger son of a disgraced family, has neither wealth nor connections, but is smitten with Mathilde at a glance. She finds the knight intriguing, but believes he is only out to seduce her. While she seeks for a way to win Therri's attention, Etienne tricks her into granting him her favor, an embroidered white ribbon, for a tournament, setting in motion a dangerous chain reaction of events. Can Etienne save Mathilde from a nightmare from her past and prove himself the true hero of her dreams?
Here's the link, if you'd like to check it out:
http://www.amazon.com/Dangerous-Favor-Joyce-DiPastena/dp/159992806X/ref=sr_1_1?ie=UTF8&qid=1327347936&sr=8-1
Posted by Joyce DiPastena at 1:06 PM