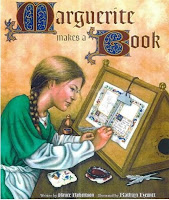 Over on my Medieval Research with Joyce blog, I have been discussing some of the source books I used to research the subject of illuminated manuscripts for my medieval romance, Illuminations of the Heart. But there was one book I forgot to mention until tonight, and I thought some of you JDP NEWS readers might be interested in it, too.

Marguerite Makes a Book is just such a gift. Written by Bruce Robertson, with illustrations by Kathryn Hewitt, this book was published by the J. Paul Getty Museum to give museum goers, children and adults alike, a greater appreciation of some of the treasures contained in that museum.

Marguerite Makes a Book is a story of a young girl, the daughter of a medieval illuminator named Jacques, who is commissioned to create an illuminated prayer book for a beautiful noblewoman. But Papa Jacques is growing old, his hands now shake, his eyes are growing dim, and furthermore, he is injured in an unexpected accident. His family needs the money this book will bring, but how will the prayer book ever be finished in time?

Enter his daughter, Marguerite, who has grown up learning much of her father’s craft. Determined to save both the family income and her father’s reputation, Marguerite sets out to gather the materials necessary to finish “illuminating” the prayer book. We follow her, in both word and picture, as she travels into town to buy some necessary parchment; gathers feathers from which to make pens; purchases herbs and minerals to make paints, and even some sheets of gold leaf. Armed with all these ingredients, she returns to her father’s workshop and finishes the paintings her father is unable to complete. And we get to watch her along every step, thanks to Ms Hewitt’s beautiful illustrations! There is even a page pull-out section where Marguerite demonstrates how she makes each of the four paint colors she needs for her task: red, yellow, green, and blue (the latter made from that precious lapis lazuli mentioned in one of my Medieval Words of the Day).

This book should delight any child. But it should also delight any adult who would like to “see” as well as “read” about how books were illuminated in the Middle Ages.

Posted by Joyce DiPastena at 9:33 PM