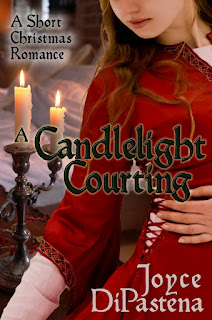 Welcome back to Sweet Saturday Samples, where authors share sweet, clean excerpts from their works. Yes, I know, I haven't participated in this hop for quite awhile, but I wanted to jump back in and share with you a sweet little taste of my new Christmas story, A Candlelight Courting: A Short Christmas Romance (rated G).

Here is the opening of A Candlelight Courting.

Christina ran her thumb over the third smooth bead and repeated another Ave. Her parents had taken away her devotional table, with its carved crucifix and kneeling bench and a rest support for her arms while she repeated her rosary. They thought they had taken her rosary, too, but she had hidden a second one under her mattress.

Her chamber’s floor chafed her knees through her woolen skirts. Her parents had removed her prayer pillow, too. She should have thought to dispose of that comfort herself. The austerity her father viewed as punishment only prepared her for her chosen future. She had blessed him for the reminder and promptly blown out her candles and doused the coals in her brazier, as well. Her teeth chattered against the chill air that seeped through her gown’s coarse fabric, but she pressed doggedly on with her prayer.

Her voice pitched higher and louder as the strains of the music swelled from the great hall of Norgate Castle below stairs, until her determination to drown out the competing noise nearly left her shouting. Why were they not singing solemn hymns on this holy night, instead of dancing like heathens? She had been compelled to attend enough of her father’s Christmas feasts through the years to recognize the driving beat that thrummed the timbers of the floor as one of the lively carole dances Lord Alun was partial to.

She imagined her father roaring in his deep bass voice, “The holly and the ivy,” as his heavy body lumbered around in an otherwise lightly skipping circle that included her mother and uncles and aunts and cousins and more meddlesome neighbors than she cared to number. “The rising of the sun, the running of the deer,” they would sing in their turn in united refrain. When her uncle the abbot reproved them, they would widen their eyes and innocently deny the words held any pagan meanings, but rather a mystical symbolism so wise a priest as he could surely discern.

He had frowned at them for eighteen years, but this was the year she would prove his strictures had fallen on one pair of listening ears.

Her thumb moved to another bead. “Hail Mary, full of grace ... ”

She wondered if God objected to being bellowed at on Christmas Eve. Or to grumbling stomachs that rumbled a low counterpoint to prayer.

Between the music, her determination to ignore her hunger, and her vociferous invocation, she did not hear the tread of footsteps outside her door. A sudden blast of pipe and drum warned her too late that someone had flung open the door. She sprang up from her knees and tucked her hands with the betraying rosary behind her back, thankful for the protective gloom that hid her motion. She wondered if she could cast herself onto her bed in pretended slumber before the intruder saw.

Thank you for stopping by! If you'd like to read more, A Candlelight Courting: A Short Christmas Romance is only $1.99 on Amazon, Smashwords, and Sony. Also available in the Apple Bookstore. (I'm still waiting for the Nook version to go live. In the meantime, you can download epub copies from Smashwords, if you'd like.)

Now click here to find some more Sweet Saturday Samples.
Posted by Joyce DiPastena at 12:30 AM

You've completely captured my attention with this sample! So many questions to be answered. This is going on my TBR list! Nice job!

So many questions I have! It is very compelling and leaves me wanting more. Very beautiful story writing.