What Am I Writing Now?

Yes, that’s “writing”, not “reading”! The rumors are true. Acelet is going on hiatus for awhile. I’m a little sorry to see him go, as I was especially looking forward to introducing you to his new friend, Bricot the jongleur! But that will have to wait. For a little while, anyway. I do intend to come back to the story and finish it someday.

And speaking of “somedays”… Some of you know that Gunthar and Heléne, the hero and heroine of Loyalty’s Web, had their origins in an early college novel of mine. They were an elderly couple in that unpublished story who helped my much beleaguered younger hero and heroine achieve their “happily ever after”. I called that early novel—the first novel I ever wrote—The Lady and the Minstrel. I loved the characters. I loved the plot. I even have a few nicely encouraging personalized rejection letters (if rejection letters can ever be viewed as “nice”) from some major New York publishing houses for it. Here’s a little sampling:
Dell Publishing: “This is an intelligently written novel with well-drawn characterizations, but ultimately it lacks the passion and romance—despite the protagonists’ enduring love—required in a historical romance.”
Bantam Books: “The novel is well written and the author shows a nice feel for time and place.”
Avon Books: “While the historical plotline is very interesting, I’m afraid the romance theme does not figure largely enough in the story to make it appropriate for our list.”
Berkley Publishing Group: “Thank you for sending [The Lady and the Minstrel]…it’s a good read, a notch above most published historicals, but just not totally spectacular enough for us to take on.”
Only one publisher actually came out and admitted that the biggest drawback was that my heroine wasn’t “lusty enough”.  (Although perhaps that’s what Dell was hinting at with their “lacks passion and romance” remark?)
Yes, even then I was writing "sweet" romances in a not-so-"sweet" romance world. And even then I had trouble sticking to the romance “formula”, because although at the time I thought I was simply writing a love story, in hindsight I can see that I had some other “non-romance” themes going on that probably ultimately shot me in the foot with romance editors. (In other words, yes, it was about the hero and heroine falling in love, but it wasn’t all about the hero and heroine falling in love.)
The point of my sharing the above comments with you isn’t to boast. It is simply to explain why I have always continued to have faith in this story. I’m actually grateful to those editors who rejected it at the time. Yes, it’s true! Although utterly heartbroken at the time, in later years I have in very truth often thought that they did me a huge favor. Why? Because if The Lady and the Minstrel had been published in its original form, I would very likely have thought my writing abilities were “good enough” and become trapped in a truly inferior writing style. Honestly, I write much, much better today than I did then! (I’d give you an example, but I’m too embarrassed.)
I have always told myself that someday, when my writing skills had improved, I would go back and rewrite The Lady and the Minstrel (along with its sequel, Knight’s Folly). I have told myself, and even a few other people, that for years and years. So when for reasons I won’t go into here, I crashed and burned with Acelet’s story at the end of 2010, I found a little voice whispering to me, “And just when is ‘someday’ going to come around for The Lady and the Minstrel? When you’re 70? 80? 90???” (Or in other words, “You’re not getting any younger, you know!”)
And so I’ve once again pulled out The Lady and the Minstrel. I still love the characters. I still love the plot. I’m keeping the story’s roadmap. But the scenes themselves…oh, my! The scenes themselves I’m rewriting from the bottom up, using all the improved, matured skills I can muster. (We're talking something like 98% "new" writing. Though compared to a book I’m currently reading “for fun”, my "improved, matured skills" still seem sadly lacking. :::sigh:) Still, I promise the end result will be MILES above the original version!
Now the question: Once finished, will anyone really want to read this book except me? It’ll still be "sweet". I hope it’ll be better written. But it still won’t be a “totally spectacular” story and the “romance theme” still may not “figure largely enough in the story” for many readers looking for a traditional romance. I don’t know that answer, but I do know this one: Since I’ve begun my rewrite, I feel at greater peace with my writing than I have in a good long while.
And so, at least for now, it’s The Lady and the Minstrel…and me! 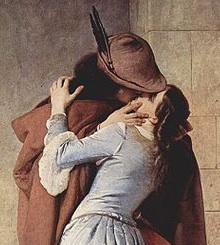 An extract from "The Kiss", by Francesco Hayez (1859)
Some of the clothing is wrong, their hair isn't quite right (though both are the right color), and yet this painting has always made me think of Rob and Marguerite, the hero and heroine of  The Lady and the Minstrel
Posted by Joyce DiPastena at 10:06 PM

Labels: An Epiphany Gift for Robin, The Lady and the Minstrel, What Am I Writing Now?, writing, writing meditations

I will read this, you can count on that, even if it has pushed Acelet aside. I am happy to see you writing again!

Thank you, Jeannette! You never know, I may flip back and forth. ;-)