Mathilde is holding a giveaway! 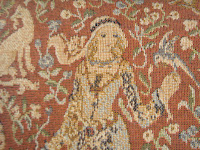 Just because Mathilde was born long before America was discovered and Thanksgiving became a holiday, doesn't mean that she doesn't have much to be thankful for, too, at this season of the year. She is thankful and excited that she will soon be sharing her romance with Etienne with you. (Dangerous Favor is scheduled for release in January 2012.)

Mathilde has a favorite romance story of her own. It's called Erec and Enide, and was written by the medieval poet, Chrétien de Troyes. Etienne asks her to share the tale with him in Dangerous Favor:
“Prince Erec,” Etienne said when she paused. “Tell me the story of Prince Erec.”
She searched his gaze, fearful of finding laughter there, mocking, however gently, her attachment to the beloved tale. But no teasing light gleamed. Only that simmering desire mingled with a kind of hollow sadness.
“Erec was the son and heir of the king of Estre-Gales and a knight of King Arthur’s court,” she began. “No man was more handsome and valiant than he, nor more accomplished in deeds of chivalry. With his prowess and courage he won the hand of Enide, a lady renowned as greatly for her generosity and wisdom as for her beauty. Erec loved Enide with such an all-consuming passion that after their marriage he spent every moment, waking and sleeping, at her side. He completely forsook his former pursuits and cared no more for arms or tourneyings.”
“His bride was fortunate,” Etienne murmured, “to marry a man of such wealth that he could abandon practicality to follow the dictates of his heart.”
“Nay,” Mathilde said, “his bride soon became most miserable because the other knights mocked Erec and called him a recreant knight. She blamed herself for ruining his honor and reputation. One day Erec overheard her lamenting. He agreed that the rebukes laid against him were just. So he commanded Enide to don her most beautiful gown and immediately they set off to restore honor to his name by fresh deeds of chivalry.”


Mathilde is eager to share the rest of the story with you by giving away a copy of Erec and Enide to one lucky reader of this blog post.

All you have to do is leave a comment WITH YOUR EMAIL ADDRESS to be entered for a chance to win. (If I don't have your email address, I can't contact you if you win.) The deadline for entering is Monday, November 28, midnight PST. The winner will be drawn by Random.org on Tuesday, November 29.
Posted by Joyce DiPastena at 9:00 AM

Many thanks for this wonderful historical. Happy thanksgiving. saubleb(at)gmail(dot)com

Getting Your Read On said...

I'm really looking forward to your new book! How exciting. :) Please enter me in the giveaway.

The story sounds so fun! and I can't wait until your book comes out. Guess what...I recently discovered that we have a family line that goes back to William the Conquerer...something like my 27th great grandfather....who knew? lol
pikefamily(at)gmail(dot)com

Looks like a great story. Thanks for the giveaway.
debby236 at gmail dot com

Bonnie Gets A Say said...

I'm looking forward to Mathilde and Etienne's book. In the meanwhile, sign me up for the give away. Thanks!
candamortensen@yahoo.com

Such beautiful writing. I definitely want a chance to win. Thank you, Joyce, for your great books and stories.

Thank you for the giveaway! edysicecreamlover18@gmailDOTcom

This book sounds great. I love a good historical story. Thanks for the giveaway.

I am waiting anxiously for your new book, and reading this would be a nice way to keep me calm until that happens! So you see, you would totally be doing me a favor if I won this! Thanks so much for the giveaway and may you and yours have a wonderful, happy thanksgiving:)
jwitt33 at live dot com

Happy Thanksgiving!
This sounds like a wonderful book.
mom1248(at)att(dot)net

Thank you for the generous giveaway. The book looks wonderful.

I've entered a couple of your giveaways, and haven't won yet. Maybe this will be my lucky entry!
writingartist @ yahoo . com

I'm so excited to see Mathilde come to light! I also can't wait for your newest youth, Aislet to make his showing!

We supposedly have a line through Richard, although my grandma seemed to think that Richard the Lionheart was William the Conqueror's Grandsire. Neat trick, Grandma. I still have yet to try and untangle that one...;o)

I'd love to read this cute book before Dangerous Favor comes out. It will give me something to do while waiting:) :)

Wow, great blog. Thanks for sharing it. Connie

Fun stories. I am curious about the name Etienne because it sounds French and female to me. How did you come about it? Happy Thanksgiving to you. renaemackley at gmail dot com

Thanks for the chance

I'd love to read it if it is a print copy. Thanks for the giveaway!

You had me at "...that simmering desire mingled with a kind of hollow sadness." Can't wait to read the rest of it, Joyce!

This sounds like an interesting read. Love Historicals.Would love to be entered if it's in print. Thank you for the opportunity and extending the contest.
Carol L
Lucky4750 (at) aol (dot) com

You have such a talent for words. I've read two of your books recently and would love to read another! jenkbeckstead@gmail.com

This book would be a treasure and so fascinating. Thanks. elliotbencan(at)hotmail(dot)com