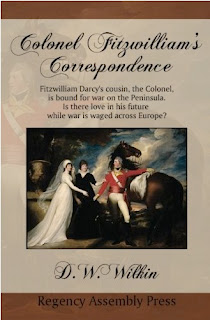 What an awesome interview! Thank you and thanks for the giveaway!

Great interview. Just the title of your research books make them sound interesting.

I thoroughly enjoyed this interview both the questions and the answers. Its interesting learning the back history that brings a book to us.

Please do not include me in the giveaway. I already own a copy. (-;

Love the premise of this book. Col. Fitzwilliam was such a minor character in terms of the pages he occupied, but i always felt there was so much more 'behind the scenes' for his character.

What a fantastic interview! A man who reads Austen, and LOVES it??? Whoo hoo!!!

Your books sound terrific, and I wish you much success! :)

* Since I don't enter contests, please do not submit my name*

Interesting interview. You asked the right questions and his answers were interesting. Great job.

How refreshing to have a man write Regencies! I'm very intrigued. I read all of Bernard Cornwell's Sharpe series. There were a few elements I'd leave out of my own book, but I found I liked Richard Sharpe, though he was a scamp. Cornwell has a great take on battles of all sorts.
I personally will someday be writing a book called Forlorn Hope, which deals with the sort of unit which always went into battle first (and got torn to tatters). I want to be able to go back over to Europe and do my own research, first. Dreaming here.
At any rate, I enjoyed taking time off from my own sprint writing to read your interview! I will certainly look up your books and I'd love a free copy. I'd even do you some reviews.
I'd also love to know where you hook up with a Regency ball. I doubt they have them around here (AZ). If they did, my sister and I would be in our element!

Joyce this is a great post. I never knew men wrote Regency romances. Now I can say I know one. :)
Thank you,
anna@annadelc.com.

Thanks Joyce for the opportunity and your interview of ol' humble me. I imagine that if your readers have any follow-up questions that wish to ask, you can send them along, or I can respond to them here in the comments.

I'd love to win this book! Please enter my name. TotallyTina
writingartist@yahoo.com

Wow. What a thorough and interesting interview! I enjoyed it so much. The only Regency I've read recently is Donna Hatch--I'll have to check these out.

Oh, my email for the contest is vipson@cox.net.

Fun interview. I'm just learning to appreciate the Regency Era and the wonderful romances written about and in that time period. Please sign me up for the drawing too.
candamortensen@yahoo.com
Thanks!

Gotta love a man who woos his wife with an Austen sequel. I'm assuming David is quite a gentleman. :)

What a wonderful writing journey. I have deep respect for historical actors and those dances... wonderful!
I'd love to check out this book--and I must add that as a woman who relishes Age of Sail fiction, I find your courage to write in a female dominated genre courageous!

An interesting interview. A Regency dance sounds like lots of fun.

How interesting, David. I felt as if I were swept back into the Regency world. Thank you for refreshing me.

You sound like a romantic guy. Was your wife pleasantly surprised with the Regency you wrote especially for her?

I admire anyone who does the research and really gets into writing from this time era and others. Must be fascinating, if time-consuming.

Congratulations and may you keep the presses hot.

thanks for this interesting feature and lovely interview. saubleb(at)gmail(dot)com

This amusing and entertaining and informative interview was so unique and special. Thanks for this wonderful book giveaway. elliotbencan(at)hotmail(dot)com

This is a very romantic story! I am delighted. How wonderful, Joyce. A male author who writes romance.
"Colonel Fiztwilliam's Correspondence" appeals to me greatly. Thank you, David, for the book recommendations. What a treat!

Awesome interview. This really helps me to find the answers to my question. Hoping that you will continue posting these type of interviews.