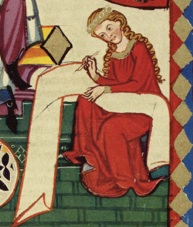 Making progress slowly but surely with my next Hearts in Autumn romance, Courting Cassandry. (I always say that, don't I? But it's true. I'm a slow, methodical writer. But still, I press forward!) Here is a sampling of what I accomplished this week.

Monday: Sir Samson to Lord Gerolt: "I do not know what passed between Cassandry and Antony, but she has changed, and I do not mean only the smattering of lines at the corners of her eyes."

Tuesday: Cassandry had never thought of his eyes like smoke. They had always only been the eyes of her guardian, eyes that laughed with her, that listened patiently to her, that weighed her words with wisdom and discernment.

Wednesday: And yet there had been something about Gerolt’s touch that day, and his smile, that for one bewildering moment had prompted her to wonder if his kiss might taste as sweet as Antony’s.

Thursday: Cassandry suddenly wished her head replete with gray hairs so she might relieve her frustration by pulling them out by the fistfuls.

Friday: Gerolt had never imagined anything but total trust and warmth could lie between them, but the years had clearly altered Cassandry in ways he had never conceived possible.

Labels: Courting Cassandry, Hearts in Autumn, What Am I Writing Now?