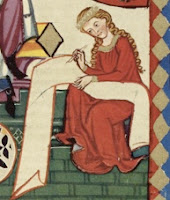 My new sentences are all from Isabel's story this week:

Monday: Neither blandishments nor threats had ever convinced Marjory to leave raisins out of Isabel’s apple tart.

Tuesday: Sir Yves gave a visible start and apparently thinking she wished him to move her direction, lurched so suddenly to his right that he crashed into Isabel’s shoulder and sent her stumbling against Lucian.

Wednesday: Isabel had studied carefully the way the serfs danced on the green and had made up her own steps for this tune, which she would have whispered into Sir Yves’ ear for him to repeat to the others had Lucian’s unexpected appearance at her side not so disrupted her thoughts that she had forgotten her plan.

Thursday: Lucian bowed with so buoyant a grin that Isabel found herself trilling a mirroring laugh as she sank into a curtsy.

Friday: It had not seemed so ill a trade before she had danced the caroles.

Saturday: Hope turned to a sour puddle in her stomach.
Posted by Joyce DiPastena at 8:00 AM

Labels: Isabel's story, Summary Sunday, What Am I Writing Now?