The temperatures are soaring in Arizona, but my hero is off fighting a war in the chilly month of March. 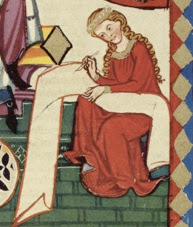 It's hard to write about camp fires when it's 115 degrees outside. Then again, I suppose it's one way to try to psych oneself through an Arizona summer!

Here are some new sentences from The Lady and the Minstrel.

Monday: Robert knew he should not cling to the surname, not with Kit Beckford in Gunthar’s camp, but if he was going to fight and possibly die for the king, he would do it as his father’s son, not some nameless minstrel.

Tuesday: Sometimes when Robert wrapped himself in his cloak, he fancied he could still smell Beck Manor in the threadbare cloth, though rationally he knew the scent had faded years ago.

Wednesday: “Mint plays havoc with one’s temper, and I am already cross enough.”

Thursday: He felt his blood churn up in anger, even as he wondered who Sir Warin was.

Friday: Robert noticed he did not mention villeins. That would be like acknowledging the milkmaid’s cow.

Saturday: He had been hungry to hear of her, but such slurs as this?
Posted by Joyce DiPastena at 8:00 AM