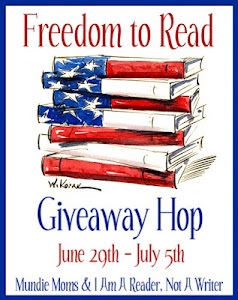 Welcome to the Freedom to Read Giveaway Hop, sponsored by I Am a Reader, Not a Writer and Mundie Moms! Here at JDP NEWS I'm giving away a copy of Killing Lincoln, by Bill O'Reilly and Martin Dugard. Here's the back cover blurb:

The anchor of The O'Reilly Factor recounts one of the most dramatic stories in American history—how one gunshot changed the country forever. In the spring of 1865, the bloody saga of America's Civil War finally comes to an end after a series of increasingly harrowing battles. President Abraham Lincoln's generous terms for Robert E. Lee's surrender are devised to fulfill Lincoln's dream of healing a divided nation, with the former Confederates allowed to reintegrate into American society. But one man and his band of murderous accomplices, perhaps reaching into the highest ranks of the U.S. government, are not appeased.
In the midst of the patriotic celebrations in Washington D.C., John Wilkes Booth—charismatic ladies' man and impenitent racist—murders Abraham Lincoln at Ford's Theatre. A furious manhunt ensues and Booth immediately becomes the country's most wanted fugitive. Lafayette C. Baker, a smart but shifty New York detective and former Union spy, unravels the string of clues leading to Booth, while federal forces track his accomplices. The thrilling chase ends in a fiery shootout and a series of court-ordered executions—including that of the first woman ever executed by the U.S. government, Mary Surratt. Featuring some of history's most remarkable figures, vivid detail, and page-turning action, Killing Lincoln is history that reads like a thriller.
This is a hard cover copy, so USA entries only, please. Deadline for entries is midnight, July 5th. If you'd like to enter, please use the Rafflecopter form below, then hop along to the links below to find some more great giveaways!
OFFICIAL RULES: NO PURCHASE NECESSARY. Entrants must be 18 years or older. Winners will be selected on June 6 and have 48 hours to respond to an email notifying them of their win. Prizes not claimed within 48 hours will be reawarded. VOID WHERE PROHIBITED BY LAW. Questions? Contact me at jdipastena@yahoo.com.
a Rafflecopter giveaway

Posted by Joyce DiPastena at 12:00 PM

It is coconut! :D

Blackberries...as in blackberry cobbler..YUM! Looks like a great book, thanks for the opportunity to win.

Any kind of melon.

I love strawberries and watermelon!
kathyross75@yahoo.com

watermellon the book i love to read it

Watermelon is my favorite.

my favorite summer fruit is strawberries

I love strawberries and any berries during the summer!

Definitely watermelon! Unfortunately I'm the only one in my family of 6 who likes it.

My favorite summer fruit is iced cold watermelon and strawberries and apricots and peaches and nectarines and . . . I love summer fruit!

It would be watermelon!
Thanks :)
kimberlybreid at hotmail dot com