My review of Dante's Daughter for my Summer Book Trek 2008 reading challenge: 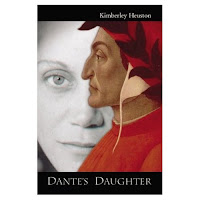 “When the adventure gets too strong, lean into it.” When political upheavals forces her family to flee and separate, Antonia takes her brother’s advice to heart as she journeys through Italy and France with her father, the poet Dante Alighieri. She becomes a pilgrim who also embraces interior journeys: she struggles with her difficult, inattentive father; with her heart’s desire to paint as her father writes; and with her first tastes of young love. All the while Antonia harbors dreams that others tell her women are not entitled to dream. Dante’s Daughter portrays a life in full, one that beautifully answers Antonia’s own questions: “Had my journey made me wise? Had my secret griefs made me strong?”

This highly imagined story—based on the few known facts of Antonia’s life—is set against the dramatic background of pre-Renaissance Europe, rendered in rich detail by storyteller and historian, Kimberly Heuston.

As someone who loves history and historical fiction and who was eager to learn more about the great poet, Dante, I find my feelings after reading this book, at best, ambivalent. The book description was certainly right about the author’s richly detailed rendering of the story of Antonia Alighieri. Stylistically, Heuston’s writing is beautifully artful and fluid, so fluid that, regrettably, I found myself jarred on more than one occasion when an un-artfully modernized phrase unexpectedly leapt off the page at me just when I was most entranced. She also had a tendency, particularly in the early chapters of the book, of scattering Italian words in the text without definition or even sufficient context to hazard a guess at their meaning. I found this a bit annoying and pretentious, but thankfully as the story wove on, this happened with a good deal less frequency and more sympathy for the reader in adding definitions and contexts.

Dante’s daughter, Antonia, tells the story of her life in a first person account. Despite the book cover’s description of Dante as an “inattentive, difficult father”, for me, the book glowed most sympathetically whenever Dante appeared on the scene. Though frequently forced away from his family by unwisely chosen political allegiances, he always came across to me as a man who loved his family, treating them all with great kindness and tolerance, more than I felt was reciprocated by his wife, sons, and daughter, Antonia. (Though his sons appear briefly in the book, they are never prominent enough to capture a reader’s attention in any true depth.) Admittedly, for much of the book, Antonia is a child and young woman who might be forgiven for being so focused on her own feelings that she only rarely seems able to reach beyond them to empathize in any form with a “difficult father” who nevertheless displayed touching instances of love, attention, and encouragement for her in return. If others tried to turn her from her heart’s desire to paint, Dante, in this book, was not one of them.

The amount of detailed research that went into this book, while to be admired, ultimately threatened to overwhelm the story for me. I felt the last few chapters particularly began to drag, as I began to wonder if we would ever reach the end of Antonia’s “life’s journey”. (And please, don’t even get me started on the touches of LDS doctrine that began to pop up at the end. I’ll be sharing some of my thoughts on that in another forum. If interested, you can check out my blog for July 7th on ANWA Founder & Friends.)

A “life lived in full” became, for me, a life lived much too full, nearly to the point of unbelievability (and sadly, knocking on the door of boredom) to me by the end of the book. In my opinion, the story would have benefited by a less broad, and more focused, approach in the telling. And ultimately, I found small evidence that the answer to the questions posed by Antonia at the beginning: “Had my journey made me wise? Had my secret griefs made me strong?” were “Yes”.

To her credit, Heuston did successfully stir my interest to learn more about the “real” Dante. After reading a few of her chapters one night, I stayed up till 3 AM, researching him in some of my medieval encyclopedias. I suspect I will be buying a non-fiction biography of him soon.

Dante’s Daughter is billed as a Young Adult book for grades 10-12. As a way to acquaint high school readers with pre-Renaissance Europe, this would probably be less painful than a dry old school textbook. But for entertainment, it will take a serious young reader to read such a seriously earnest book all the way to the end.
Posted by Joyce DiPastena at 5:19 PM

Sounds like a really intriging book, I may catch it sometime and read it myself, thanks for your comments and review!

Hmmm, I don't think this sounds like something I would like, from your description. Thanks for doing the review.

It sounds rather overwhelming. I love historical fiction - and also biographies. But from your description, this sounds like it gets pretty bogged down and drags at times. Thanks for the review!